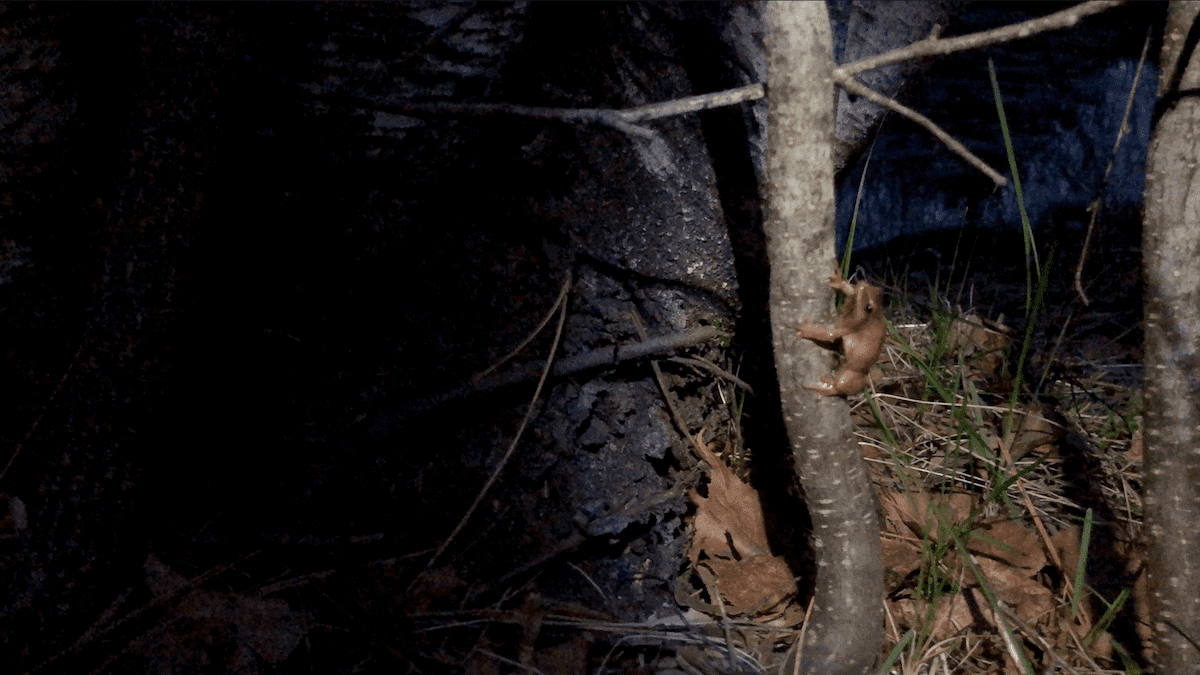 Those noises you hear in the pond behind your home at night probably are not crickets or ducks – they are more than likely frogs. Frogs thrive at night. This makes many frogs quite active (and loud) once the sun sets.

Generally frogs are active at night because their senses are well-suited to darkness, they enjoy the evening humidity, and many of their predators are less active at night. Frogs spend most of their time calling mates or eating at night.

The evening and night are great times for frogs to blend into the environment, attract mates, avoid predators, and find food.

Frogs Can See In Color At Night

Night vision is the ability to see in a very low light setting. Many animals have low-light night vision, but frogs and toads are some of the few species that can see in color in the dark. Many animals can only see in black and white, while humans are hardly able to see anything in low-light. However, frogs have 360° vision and can decipher blue and green at night.

During the day, frogs tend to hide under dead leaves, in water, or underground. Being able to see in color at night helps frogs be more able to understand their surroundings and effectively seek out prey and protection. Since frogs do not need a lot of light to navigate their surroundings, they have a distinct advantage over most animals.

Learn more about how frogs see in this article on our blog.

Frogs Hunt And Eat At Night

Frogs love to eat insects, spiders, worms, slugs but also eat small mice, birds and bats depending on the size of the frog. Smaller frog species such as poison dart frogs tend to eat smaller prey. For example, they eat ants that help them produce their natural poison. Bullfrogs are large and commonly eat bigger prey such as large spiders and mice.

As a general rule, depending on the species, frogs hunt two different ways: passively or actively. Frogs can be ambush predators and employ a passive “sit-and-wait” technique where they wait for food to come to them. Other frogs actively hunt, chase, and eat their prey.

Sitting still gives frogs an advantage when they attack their unsuspecting food. You may find a lot of toads in your back yard at night because they are attracted to the bugs that are attracted to your back yard lights! They may sit near bugs flying infant of a light and once the time is right, the frog can stick out its long sticky tongue and pull the prey into its mouth.

It’s definitely not your imagination if you think that frogs are much noisier when the sun goes down, you are probably right. I guess we could have titled this section “Frogs Keep You Up At Night” 😉

Male frogs try to attract female frogs of the same species at night, so they can be very loud and sometimes heard up to 1km from where they are located. Frogs generally make noise in the evenings right after sunset once their predators are less active.

Watch the video above where we go searching for one of the loudest frogs in the Spring at night. If you have a fish-free pond surrounded by a wooded area near by and live in North America, you probably hear Spring Peeper.

As a general rule, male frogs make noise from March to June in Canada and the Northern US, and from November to March in the Southern States. Frogs start to make noise in the evening during the mating season into the early morning around 2 or 3 am. So they do make noise most of the night, but should not make noise all night long (CTNF).

Frogs Breathe & Drink Through Their Skin at Night

Frogs breathe and drink through their skin, but they can only do so if their skin is moist and healthy. This is why hydration is an important factor in a frogs nighttime activities. It’s easier for frogs to stay cool and damp at night because the sun has gone down.

You’ve probably noticed that dew forms on grass overnight. This is because the water has time to cool and condense rather than evaporate. This is the best time for frogs to explore their surroundings because they don’t need to worry as much about dehydration.

Frogs Are Active At Night to Avoid Predators

Darkness creates a certain form of protection for frogs. While their main predators are sleeping, frogs can actively call, mate, lay eggs, and hunt. But if frogs can see and hunt at night, what about their predators that are active night hunters, like skunks, foxes and raccoons?

The reason that skunks, foxes and racoons will most likely not see the frogs is that many frogs have skin patterns that help them blend into the environment.

Although another animal or other reptile may have night vision, they have a lower chance of seeing color at night compared to what most frogs can see. This makes it easier for frogs to camouflage themselves into the surrounding environment.

Check out this article on our blog to learn more about frog defence mechanisms.

Why do Frogs Make Noise at Night?

Male frogs make noise at night to attract female frogs to mate with. This is especially true in the Spring time in North America, after rainfall, or during the frogs mating season.

How Long do Frogs Make Noise?

Male Frogs make noise from sundown to about 2 to 3 am during mating season, generally from March to June in the North, or November to March in the South to attract female frogs of the same species.

Why Are Frogs so Loud?

Frogs are very loud to attract female frogs of the same species that can be far away, and to show that they are sexually fit. Depending on the species, male frogs can be heard up to 1km away.

Do Frogs Make Noise all Summer?

As a general rule, frogs do not make noise all Summer and may migrate after mating season. Male frogs will generally peep from March to June in Canada and the Northern US, and from November to March in the Southern States.

Do Frogs Make Noise all Night?

As a general rule, frogs start to croak in the evening right after sunset during the mating season into the early morning around 2 or 3 am. So they do make noise most of the night but should not be loud during the whole night.

How do Frogs Sleep?

Learn more about frog eyes in this article on our blog.