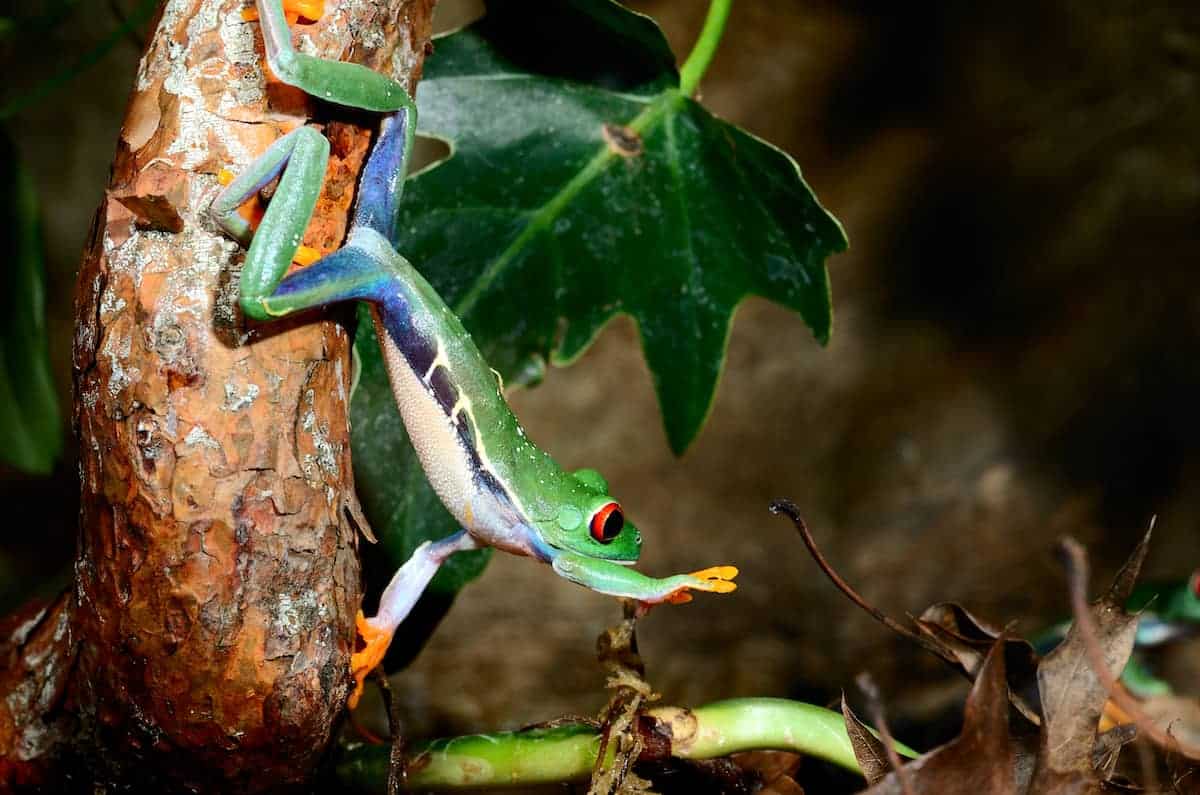 I had a wild frog as a kid and loved to watch it eat a variety of bugs in the backyard. Later on, I did some research to learn what else frogs eat and realized that frogs eat much more than just bugs!

Frogs eat invertebrates, small mammals, small lizards, small freshwater shrimp or fish, and smaller frogs. As a general rule, if the prey is moving, is large enough for the frog to see, but small enough to fit into its mouth, the frog will eat it.

Here is a brief summary of what frogs generally eat depending on their lifecycle stage:

Frogs are carnivores that eat live prey that they actively or passively hunt. Let’s see what frogs eat depending on their lifecycle stage, and if they are pets or in the wild.

Table of What Frogs Can Eat

Frogs are carnivores that typically only feed on live or moving prey. If it is large enough for the frog to see and small enough to fit into its mouth, the frog will probably eat it.

Here is a full table of almost everything frogs can or cannot eat:

What Tadpoles And Froglets Can Eat

At the stage of eggs, frog eggs feed on the yoke from their egg. They cannot move and have no mouths so they rely on their own storage of naturally-formed yoke to survive.

Tadpoles primarily eat algae, plants, small insects, and phytoplankton. Tadpoles may also eat smaller tadpoles if their location lacks other nutrients for them to feed on. In captivity, you can feed tadpoles rinsed or boiled lettuce, spinach, or broccoli.

However, once they pass the stage of being tadpoles, frogs are no longer omnivores and feed on live prey. Froglets, or Baby Frogs, eat small bugs, small fish, and smaller frogs. They may eat crickets, flys, mosquitos, fruit flies, guppies, minnows, small moths, small snails, small worms, tadpoles, and other froglets.

Find out everything tadpoles can and cannot eat in our complete guide to feeding tadpoles.

What captive frogs eat and how often frogs eat depends on the species and the size. Here are some examples of common pet frogs and what they eat:

Gut loading the prey before feeding it to the frog can be very beneficial to your pet. By feeding the crickets fruits and vegetables a few hours before feeding your frog, the nutrients are passed on to the frog and help them get the vitamins and minerals they need in their diet.

Frogs can eat all kinds of worms but some are better than others. Be sure to check out our article that is linked above to know which worms are best for frogs. Some people “dust” the prey with adapted supplement powders containing Vitamin A, Vitamin D or calcium to ensure their pet frog is truly getting all the nutrients they need (CTNF).

Frogs prefer live prey and will only eat dead insects or dead mammals if they are starving. So do not get a pet frog if you do not want to feed it live food.

Learn more about the reasons not to have a pet frog in this post.

How Big Should a Frog’s Food Be?

As a general rule, anything a frog eats should be no wider than the distance between the frog’s eyes and no longer than ⅓ of the frog’s body length. Feeding a frog food that is too large can lead to vomiting, impaction, illness or death.

Frogs will try to eat anything they can fit in their mouths but may also be attracted to items too large for them. I found this toad looking at a caterpillar much too large for it to eat. Thankfully the toad realized this and moved on to smaller prey.

Feeding a frog food that is too large can lead to:

Smaller frog species such as poison dart frogs tend to eat smaller prey. For example, they eat certain ants which helps them produce their natural poison. Bullfrogs are large and commonly eat bigger prey such as large spiders and small mice.

Frogs may also eat their own skin. This is very common for amphibians and is a process called “sloughing.” Frogs naturally shed and eat their skin which contains nutrients and protein. They do so to stay healthy and their tracks from predators.

More About What Frogs Eat

Did you know that frogs eat by quickly launching their long, sticky tongue at their prey to catch it off guard and snatch it up? Frog prey gets roped up in the frog’s tongue and sticks to their saliva. Frogs then retract their eyes into their sockets to swallow their live food.

Frogs can be lazy or active hunters, but overall they are big eaters. Some frogs, like Pacman Frogs, are ambush predators. They hunt by sitting and waiting for their prey to come to them. Other frogs are active hunters and will hunt down their prey.

Learn more about what and how frogs eat in these articles on our blog:

Common Questions About What Frogs Eat

Do Frogs Have Teeth? Some frogs have teeth in their upper jaw, on the roofs of their mouth to help them swallow their prey and keep it down. Generally, a frog’s teeth are not used for self-defense and are only visible from the inside of their mouths.

What Can I Feed a Frog? You can feed wild frogs bugs that are available in their environment that are smaller than them. You can feed pet frogs adapted prey that is grown in captivity. But do not feed wild-caught bugs to pet frogs to avoid exposing them to pesticides or parasites.

Can a Frog Eat a Mouse? Large frogs such as Bullfrogs or Pacman Frogs can eat small mammals including mice and other rodents, small bats, small birds, small snakes, salamanders, and small alligators.

Do Frogs Eat Lettuce? Frogs are carnivores that eat live, moving food. Therefore, human food including lettuce is not adapted to frogs. Tadpoles however, may enjoy lettuce or spinach, but prefer algee. Do not feed froglets or adult frogs lettuce or human food.

How Long can Frogs go Without Food? Frogs can go without food for 2 to 7 days depending on the species and their last meal. For example, a bullfrog that ate a mouse can wait up to 7 days for its next meal, whereas a dart frog that ate ants should eat again within 48h.

Can Frogs Eat Fish Food? Frogs cannot eat fish food. Frogs are carnivores that eat live, moving food, and fish food or guppy flakes is not appealing nor adapted to frogs as feed.

How do Frogs Drink? Frogs “drink” water by absorbing the humidity around them through their skin. This is one of the main reasons why it is so important that frogs live in a humid environment or close to water.

Can Frogs Choke? If a frog ate prey that is too large for its body, it may choke or experience intestinal issues. Frogs eat their own skin which may look like choking to humans. But sloughing is a natural process that frogs carry out regularly, often in the morning.

Do Frogs Eat Dead Bugs? Most frogs will starve before they eat anything not moving like a dead insect or dead mammals. Frogs are carnivores that prefer to eat live, moving food.