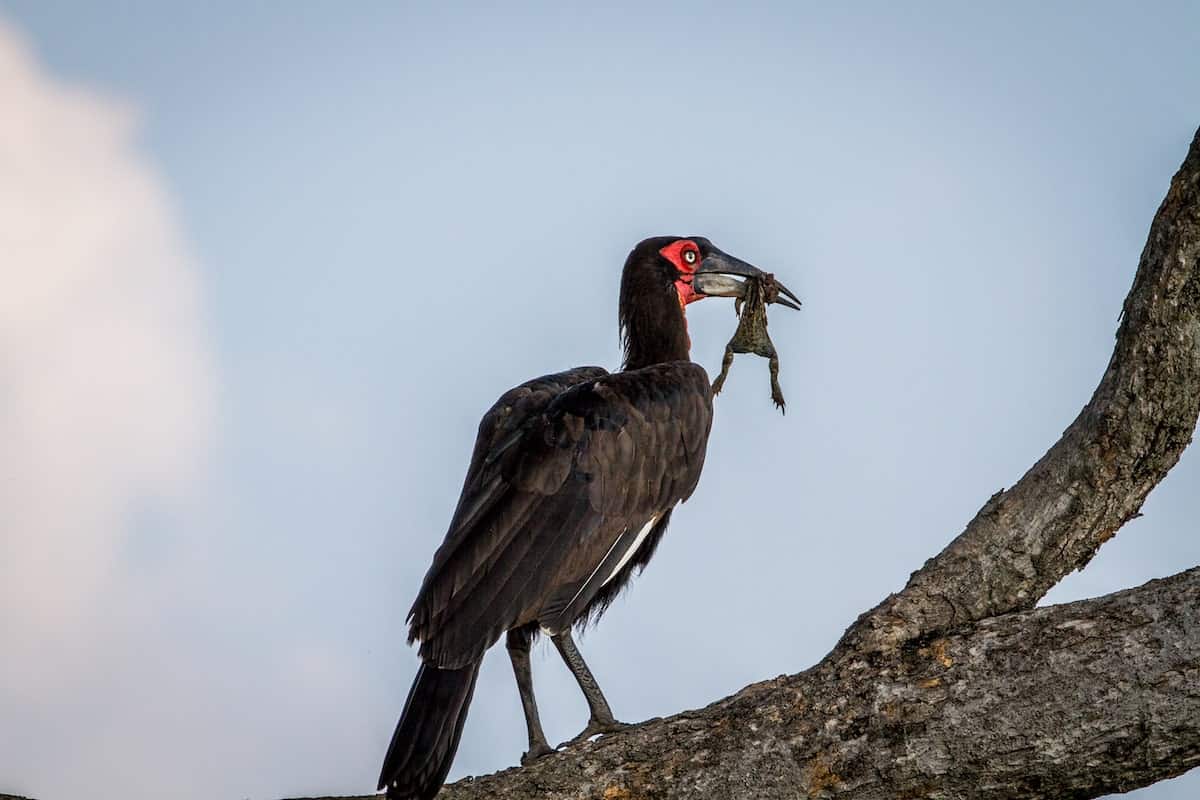 Although frogs have incredible defense mechanisms these do not always work against their hundreds of predators that are lurking at every corner. Frogs are especially vulnerable while they are still eggs or tadpoles.

Frog predators include birds like herons, crows, and ducks; reptiles such as lizards, snakes, and alligators; big game fish including bass and muskellunge; small mammals from skunks and foxes, to raccoons, otters, and monkeys; as well as water bugs, other frogs, and humans.

Some frogs are ferocious predators, like bullfrogs that can eat bats, tarantulas, and mice. But even bullfrogs are vulnerable to being eaten at any moment of the day underwater, on land, or even by a predator lurking in the sky above.

Here is a quick overview of what eats frogs:

Herons, cranes, storks, and egrets like to wait quietly in the water to spot and catch frogs off guard. The presence of these kinds of birds at a fish-free pond can be a good indicator of frogs being present.

All kinds of small and large lizards and snakes enjoy eating frogs. These include monitor lizards, Garter snakes, Asian Pit Vipers, and Asian Keelback snakes. Newts eat tadpoles and some aquatic turtles like Snapping Turtles also eat frogs. Alligators are well known to eat frogs wherever they are part of the aquatic ecosystem, like in Texas, Florida, Georgia, and parts of China.

Pets including cats and dogs may also be predators to frogs and may eat them intentionally or unintentionally during play. Cats or dogs may become sick, vomit, or lose their appetite if they eat a frog. Somewhat like cats and dogs, in certain regions of the world monkeys may also play with frogs and eat them.

Yes, frogs do eat other frogs making them cannibals. Some larger frogs will gladly eat smaller ones and tadpoles. Frogs may even eat their own tadpoles. A scientific study found that “large invasive frogs that live in forests with high anuran diversity are most likely to have a higher proportion of anurans in their diet” (source). So in forests where there are more frog species, large invasive frogs are more likely to eat other frogs.

Dragonflies, diving beetles, waterboatmen, dragonfly larvae, and other large water bugs also eat frog eggs. One of the reasons frogs spawn so many eggs is because these eggs have no defense against hundreds of predators that are close by, or right in the water with them. These bugs have an advantage since they can easily access the eggs from above or directly within the water.

Learn more about what frogs you can eat in this article on our blog.

Some frogs are hunted and eaten by humans. Humans hunt certain types of frogs to survive in places like Vietnam, Cambodia, Thailand, and Indonesia. Frog legs are also considered delicacies in France, parts of Europe, South Africa, and the Southern regions of the United States.

The pet trade is another way humans exploit frogs for profit. Although having a pet frog may sound very appealing, some frogs are endangered due to human influence, including the pet trade. For example, the Goliath Frog is an endangered species due to such activity, and the Equatorial Guinean government declared that no more than 300 goliaths could be exported per year for the pet trade (source).

Learn more about frogs you can eat in this article on our blog.

A large number of frogs are killed every year on the roads by motor vehicles. Roads often cut patches of land in half degrading a frog’s natural habitat. To get back to the pond where it was born and reproduce, frogs may have to cross roads and are often killed in the process. Polluted water kills the organisms that help frogs and the rest of the ecosystem thrive.

After reading about all these predators you may be wondering how frogs are still around! Frogs have smart defense mechanisms against predators, like puffing up their bodies to intimidate and surprise them, playing dead, biting, screaming, urinating to cover their scent, camouflaging, jumping, leaping, or swimming away.

Learn more about frog defense mechanisms in this article on our blog.

Using Predators to Keep Frogs Off Your Property

You can use frog predators to keep them off your property if you prefer to have a predator instead of frogs in your yard or garden. For example, you could favour the presence of snakes in your yard to naturally eat frogs and control the population.

If you have frogs on your property and are looking for natural ways to get rid of them, check out our detailed guides below more information on how to get rid of frogs without killing them:

What Eats Frogs? Frogs can be eaten by birds like herons, crows, and ducks; reptiles like lizards, snakes, and alligators; big game fish like bass and muskellunge; small mammals like skunks foxes, raccoons, otters, and monkeys, and water bugs, other frogs, and humans.

Do Frogs Eat Other Frogs? Large frogs will gladly eat other smaller frogs and tadpoles. Frogs are known to be cannibalistic and even eat their own tadpoles. Large invasive frogs living in forests with high frog diversity are most likely to have a higher proportion of frogs in their diet.

Do Frogs Eat Birds? As a general rule, large Ranidae frogs like Bullfrogs, South American Horned Frogs, and Pixie Frogs eat small birds including hummingbirds, quail, and even bats. These aggressive frogs will generally eat any vertebrate or invertebrate that can fit into its mouth.

Can a Dog Eat a Frog? Dogs may eat a frog intentionally or unintentionally during play. A dog may become sick, vomit, or lose their appetite if they eat a frog. Ensure the frog that was eaten was not poisonous or consult a veterinarian if necessary.

Do Monkeys Eat Frogs? Monkeys are omnivores that like to feast on leaves, fruit, insects, bird and lizard eggs, small lizards and birds, as well as frogs. Monkeys are curious creatures and may play with frogs but also hunt them for food.

Are Frogs Cannibalistic? Frogs are cannibalistic creatures that eat their own species and even their own tadpoles. Frogs are mostly solitary outside of mating season. Large frogs should not be kept with smaller frogs as pets as the large frog could eat the smaller one.