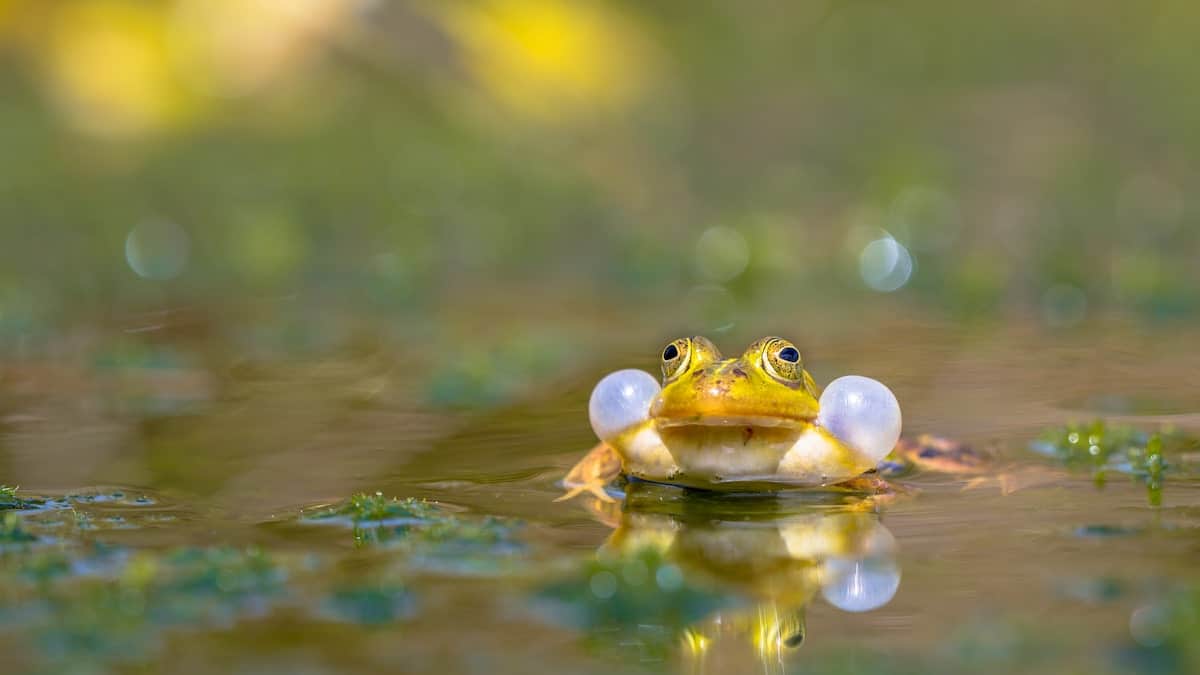 Frogs make a variety of sounds from the common “ribbit ribbit” to the more sophisticated croak, chirp, or hoot. But the sound a frog makes truly depends on a variety of factors.

As a general rule, the sound a frog makes depends on the species, their intent (mating, territorial defense), and the language that the human interpreting the sound speaks. English speakers think frogs make a “Ribit Ribit” sound whereas French speakers hear “Croac Croac.”

Let’s have a look at each of these factors in more detail.

Frog Sounds Depend on Species

Each frog species has its own sounds and calls. This allows male frogs to attract female frogs of the same species. Frogs use sounds and silence to attract and warn other frogs. They may make a long trill or small chirping with intermittent pauses.

For example, male Spring Peeper make chirping sounds that they sing in chorus which can be heard up to 1km away from their location in the early Spring. These frogs are very small but can make loud, high pitched chirps to attract females of the same species during mating season.

Above you can listen to what Spring Peeper sound like, and see what they look like up close in the video below where I go on an adventure to find them. Even though they are loud and right next to me, they are hard to spot! But it is rewarding once you finally find one.

If you would like to identify a frog sound in your area, start by looking for indicators that frogs are present near a water source like a pond, lake, stream, or river. Also, consider the time of year since frogs actively call during mating season. Find out which species are present in your area and match what you hear with the species.

Frog Sounds Depend on Intent

Frogs can trill, chirp, scream, bark, grunt, peep, beep, cluck, croak, quack, whistle, bellow, and hoot. But their choice of sound depends on their intent. Frogs make different sounds for different reasons, for example, to attract a mate, defend their territory, or fend off a predator.

Some Frog Sounds Can Be Heard Up To 1.6km (1 Mile) From The Frog

Frogs have a unique mating call to attract frogs of their own species. Male frogs find the perfect place to reproduce and then call female frogs to them during mating season. In North America, Spring Peepers, for example, will find small ponds and make high-pitched quaking sounds to call mates.

Generally, frogs scream to startle or scare predators. Frogs may also release distress, warning, mating, territorial and rain calls that could sound like screaming. Screaming generally is one of the many defence mechanisms a frog may use to protect itself.

Some frogs scream when they are afraid or if a predator gets too close. A frog scream may sound funny (watch the video above) but it can be an effective way for them to surprise a predator and deter it from attacking (CTNF).

The Desert Rain Frog will puff up like a little balloon and scream to scare its enemies and defend itself. It is a tiny frog and its scream sounds more like a squeak from a dog’s toy, but if they are still here today and using this technique to scare predators, it must mean it works!

Frog Sounds Depend on Linguistic Interpretation

If you speak English, then you may believe that frogs “Ribit Ribit.” But if you speak French, a frog makes a “Croac Croac” sound. And for Spanish speakers, frogs make a “Croá, Croá” sound.

Here are some other sounds frogs make depending on the language you speak:

It is important to keep in mind that how the human interprets the sound a frog makes is also a factor that comes into play when imitating frog sounds. Also, some languages have more precise verbs and adjectives to describe such sounds compared to others.

Frog calls depend on the frog’s intent and how us humans interpret their sounds. Learn more about frog sounds in the guides on our blog below!

What Sounds do Toads Make? As a general role, toads make croaking, quacking or chirping sounds depending on their intent including mating or territorial defence. Each toad species has unique calls and sounds.

How Do Frogs Make Sounds? Depending on the species, frogs use their vocal sacs to make sounds by closing their nostrils and pushing air into their lungs and vocal sac using it as a resonating chamber. Only male frogs can make sounds but some female species were found to do so as well.

Do All Frogs Sound The Same? All frogs do not sound the same since each species has its own unique calls. Male frogs make unique calls using their vocal sacs to attract female mates, to defend their territories, or fend off predators.

Can Humans Hear All Frog Sounds? Humans cannot hear all sounds frogs make as scientists found a frog species that can communicate using purely ultrasonic calls, whose frequencies are too high to be heard by humans.

Are Frogs Noisy? Frogs can be noisy in the wild especially around mating season. If there are tens to hundreds of frogs competing to attract females, they may increase the volume of their mating calls to drown out other males.

How do You Identify a Frog Sound? To identify a frog sound, start by looking for indicators that frogs are present in the area with a water source, and consider the time of year since frogs actively call during mating season. Find out which species are present in your area and match their mating calls.

Why do Frogs Scream? Some frogs scream when they are afraid, feel like they are in danger, to defend their territory, or if a predator gets too close. A frog scream may sound funny but it can be an effective way for them to surprise a predator and deter it from attacking.

Music of Nature: Calls of Frogs and Toads