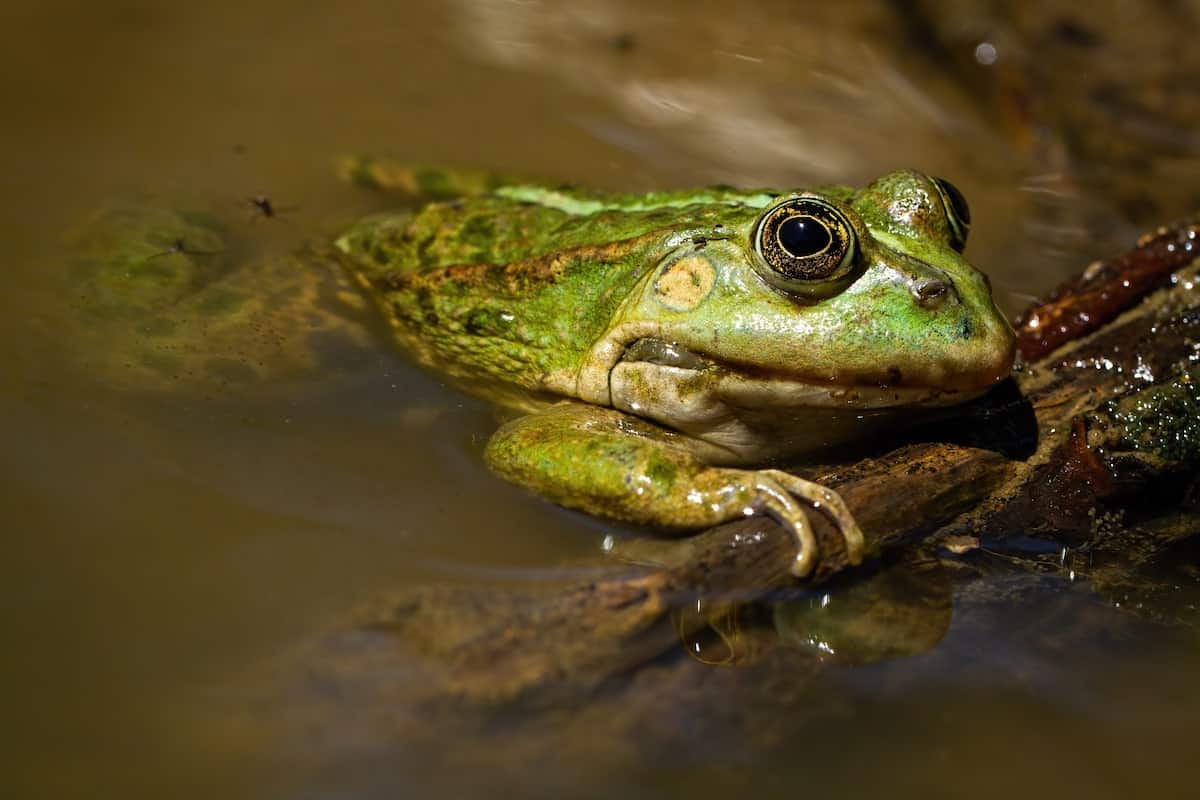 Frogs truly have fascinating skin, not only from an observational position, but also from a biological, physiological, medical, and pharmaceutical standpoint.

Frog skin is thin, moist, delicate, slimy, permeable and allows frogs to breathe, drink, and protect themselves. Frog skin can be used in pharmaceuticals for its antibiotic resistance fighting properties, and pain-killing properties.

Let’s begin with the texture, then discuss the roles frog skin plays for frogs as well as for humans in medicine.

Frogs Skin is Slimy And Moist

Frog skin is slimy, moist, thin, permeable, and is covered in a thin layer of mucus. A frog’s skin absorbs the humidity around it to intake oxygen and remain hydrated.

Contrary to reptiles that live on land, have scales and tough skin, frogs have smooth slimy, and moist skin that is very permeable to water. Frog skin is covered in a thin layer of slimy mucus that absorbs humidity and water around them to extract oxygen and keep them moist.

A frog out of the water and in full sun will die without shade or access to water. The ideal frog habitat to suit their anatomy contains freshwater, access to plenty of food, and a safe place to reproduce. Each of these habitat essentials makes it easier for frogs to live in the wild and keep their population thriving.

Learn more in our article about the ideal frog habitat and where frogs live.

Toad Skin is Dry And Warty

Toad skin is generally rougher than frog skin. Toad skin is covered in warts and can feel like leather. Toads also have parotoid glands behind their eyes on their backs that secrete poison, contrary to some frogs that can secrete it directly through their skin.

Although toads live on land and have rougher skin than frogs, toads are still frogs. All toads are a subclassification of frogs (Anura) and so they also use their skin to breathe, drink, and protect themselves even though their skin’s structure is slightly different from most arboreal or aquatic frogs.

What is special about frogs’ skin is that it plays four vital roles in the species survival from allowing them to breathe and drink while protecting them from the elements and predators.

Frogs Breathe Through Their Skin

Fish live in water and have scaly skin to protect them from the elements, but they have gills to breathe and cannot survive on land. Whereas frogs have gills as tadpoles that they lose as adults to primarily breathe through their skin and lungs, allowing them to live in water and on land.

Learn more about how frogs breathe in this dedicated article on our blog.

Frogs Drink Through Their Skin

Frogs drink through their skin by absorbing moisture in humid air, rain, soil, and in the water around them. If frogs or toads need more water, they may absorb it through their “drinking patch” located on the surface of their belly that they press into wet areas like small puddles.

Like all living things, frogs need water to survive. Amphibians mainly remain moist by absorbing water through their skin. But if a frog really needs to get more water into their system because they are dehydrated, they may sit on a wet surface like a leaf, puddle, or dewy grass to absorb the water through the “drinking patch” located on their bellies (CTNF).

Although toads spend most of their lives on land, they are generally active at night when the sun is down, temperatures are cooler, and the atmosphere is more humid. They spend most of their day underground in holes so the soil can keep their skin hydrated.

Frogs Skin Protects Them From Predators

Frogs can use their skin to hide from predators by camouflaging and blending in with the environment around them. Frog’s skin provides them important feedback to help with flight or fight response and to secrete poisonous toxins that can paralyze or kill their predators.

Thanks to camouflage, if a frog looks exactly like its environment, a predator may not see the frog, or may think it is dead, and move on. Many frogs also secrete toxic poisons from their skin that they use to fend off predators or kill them. Colorful Poison Dart Frogs use their primary-colored skin as a warning to predators not to eat them.

Frog’s skin provides them very important sensorial information to help them make one of two decisions they spend their days acting on: Will this eat me? And can I eat this? Frogs can hear and sense vibrations, wind changes, and other key indicators of activity around them that help them make these life or death decisions.

Learn more about frog predators in this dedicated article on our blog.

Frogs Skin Protects Them From The Elements

The mucus on frog skin helps keep in important nutrients like healthy levels of salt while excluding elements like certain pathogens and parasites. It also provides frogs lubrication to remain hydrated and glide through the water.

Most frogs cannot live in saltwater because high concentrations of salt hinder their ability to breathe through their skin and dehydrate them. However, frogs do have small, healthy amounts of salt in their bodies that are necessary for their survival. The mucus on their skin helps keep in the right amounts of salt and nutrients while keeping out most pathogens and parasites through a process called osmoregulation. The mucus also contains chemicals that can kill certain viruses, bacteria, and fungus.

But a frog’s skin cannot protect them from everything. Pollution is something that often kills frogs since foreign, man-made chemicals in their environment can easily penetrate their skin and affect their breathing, growth, and overall health. High enough concentrations of pollution can easily kill frogs. This is another reason why it is so important to protect our environment.

For thousands of years, toad and frog skin and secretions have been used to cure infections, inflammation, pain, allergies, cancers, and even erectile dysfunction.

Frog skin has been found to have antibiotic-resistance fighting properties and pain-killing properties. Frog skin is also used in a variety of traditional folk medical practices, as well as modern-day rituals like Kambo that have more or less proven medical health benefits.

More and more human diseases are becoming resistant to antibiotics due to their over-use and presence in our waterways. Frog skin was found to have antibiotic-resistant properties that can fight against this problem. This was discussed at length during a meeting of the American Chemical Society in 2010.

Some frogs have enough poison on their skins to kill up to 10 people and others have chemicals that have 200 times the power of regular morphine in mice. However, this solution is not currently used in modern medicine since it is detrimental to humans. More research is needed to find the right uses and doses.

Use of Frog Skin Used in Alternative Therapy

Poison secreted from frog skin is used in a variety of traditional, modern alternative therapy, and folk medical practices like Kambo, but the benefits are not based on scientific evidence.

Frog’s skin has a lot of different chemicals and depending on the type of frog, some can be harmful to humans while others can be helpful, or both. Indigenous peoples and shaman of South America use frog skin secretions in Kambo to “cleanse the body of toxins.”

This practice uses toad poison to allegedly help humans relieve a variety of conditions including anxiety, chronic pain, cancer, depression, and addiction. Ingesting the poison leads to vomiting, dehydration, and diarrhea and has lead to several deaths. Although some people say the practice has helped them, there is no scientific evidence of this, and Kambo is not regulated by the US FDA.

Frogs and toads may also eat their own skin. This is very common for amphibians and is a process called “sloughing.”

Frogs and toads naturally and regularly shed their skin as they grow larger. Shedding also helps them remove parasites. Frogs eat the skin they shed because it contains nutrients and protein that is good for them. Toads and frogs eat their own skin to stay healthy and cover their tracks from predators.

They generally do so in the early morning by rubbing their front arm over their head and eating the skin. It may look like the frog is choking, but this is a normal process.

Frogs Have Tiny Hairlike Structures on Their Bodies

Frogs do not have hair however they have tiny hairlike structures on their bodies called cilia that help propel them through water and protect their skin. Hairy Frogs do not actually have hair but strands of arteries covered in skin allowing them to take in more oxygen.

According to Oxford Languages, cilia is ‘a short microscopic hairlike vibrating structure found in large numbers on the surface of certain cells, either causing currents in the surrounding fluid or, in some protozoans and other small organisms, providing propulsion.” Cilia provide frogs’ skin a way to spread the mucus all over their bodies and help them glide through water.

ACS.org, Frog skin may provide “kiss of death” for antibiotic-resistant germs, presented at a meeting of the American Chemical Society, 2010

Healthline, What’s the Deal with Kambo and Frog Medicine?