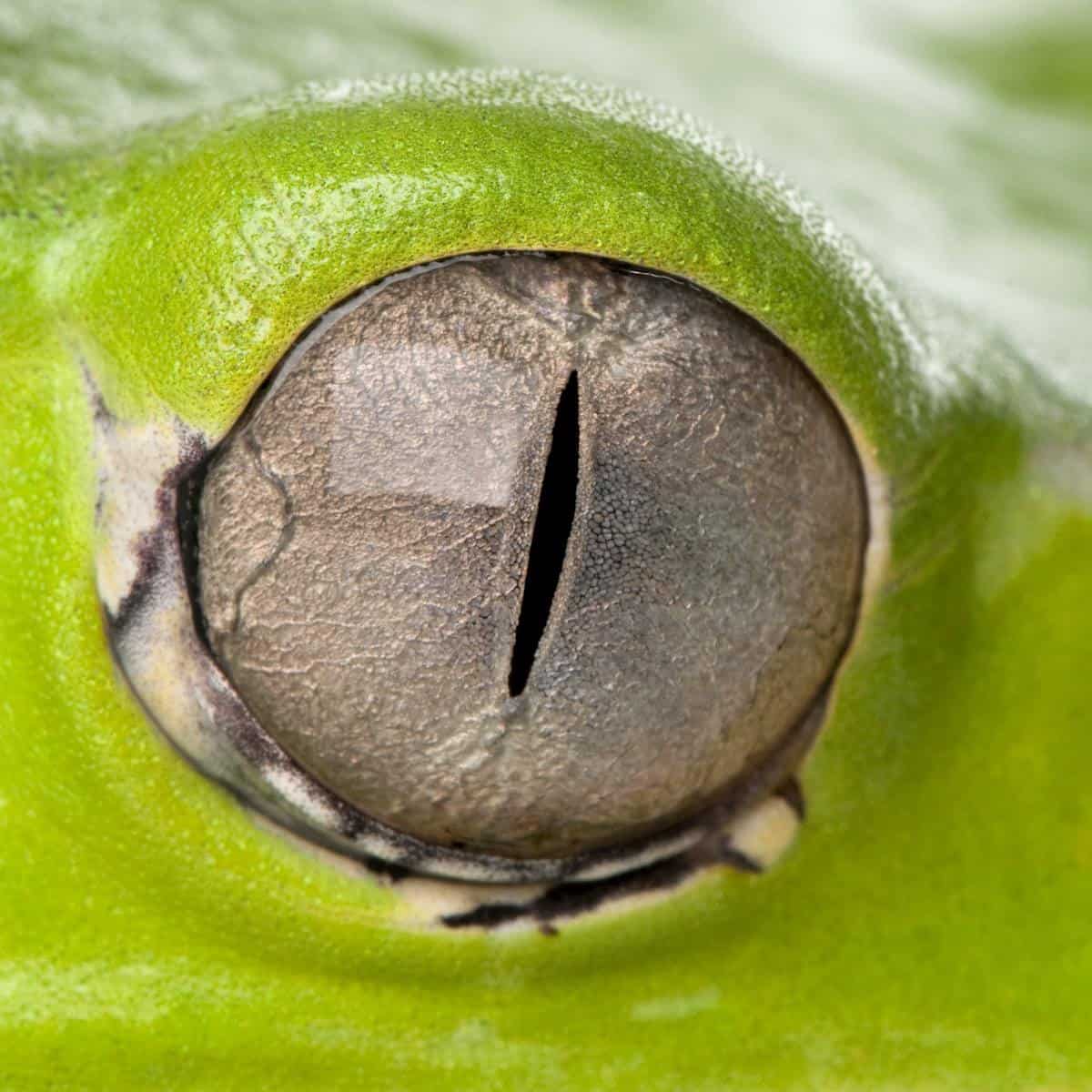 Have you ever looked at a frog’s eyes up close? They are incredible! They look like tiny planets full of speckles, color and depth.

Frog eyes bulge out to sit above water and have horizontal or vertical pupils that can see in color, and provide frogs almost 360° day and night vision. Frogs eyes also have three eyelids and help them swallow their food.

This article is about incredible facts you may not know about frog eyes. Let’s have a look at how frogs have adapted their vision to their environment in order to survive and thrive.

1. Frog Eyes Bulge Out to Sit Above Water

Although a large amount of frog species live in the water, frogs generally have poor underwater vision. However, they have adapted to their environment and have eyes that sit above the water allowing frogs to comfortably spend hours with their bodies submerged to breathe and hide from predators.

Frogs breathe in water, and just imagine if a frog’s eyes did not bulge out. Aquatic frogs would be sitting in water with their eyes submerged, and since they cannot see well underwater, and have many terrestrial and aerial predators, this would not be helpful for their survival.

Having eyes on top of their head allows frogs to be able to see what is around them while they sit with their bodies underwater. You can think of it like a snorkel that allows divers to breathe, or the periscope that sticks out of water to allow submarines to see above the surface while remaining below it.

Frogs have almost a 360° field of vision allowing them to see upwards and backwards. Frogs can therefore sit in water with a detailed view of what is going on above, below, and around them to spot food or predators.

Another advantage of having their eyes on top of their heads is that this anatomical configuration provides frogs with almost a 360° field of vision. This is key for them to be able to spot predators in the water with them, on land, or in the sky above them. This field of vision also allows them to spot prey they can eat.

Compared to humans that have approximately 230° field of vision, frogs have a much wider field of view at 360° and can see much more of what is going on above, around and behind them. This is also very practical since frogs cannot turn their heads (they have no neck).

A frog’s third eyelid also helps them camouflage, hibernate and sleep. Frogs use their nictitating membrane to hide from predators and camouflage because light could reflect in their eyes and give their location away. During hibernation and while frogs sleep, this membrane helps protect the frog’s eyes while keeping them moist.

Learn more about what frogs do at night in this article on our blog.

4. Frogs Use Their Eyes to Swallow Food

Frogs also use their eyes and nictitating membranes to swallow food by sucking their eyes down into the roof of their mouth after having caught prey. Frogs eat live prey that they catch off guard, swallow whole, and suffocate in their stomachs so they use their eyes to push the prey down their esophagus.

Frogs will close their eyes using their nictitating membrane after they catch their prey to help them swallow their food. Frogs are not the only ones that have this third eyelid as it is very common in domestic pets like cats and dogs, as well as diving animals like crocodiles, beavers and sealions. But frogs are one of the rare species that swallow using their eyes.

I used to watch my toad do this as a kid. I had what I called a “free range” toad that lived in our backyard and I enjoyed feeding it potato bugs. I would drop it in front of a bug and watch it see the prey, turn its body towards it, suck it up, and swallow it, pushing it down by closing its eyes. It would also wipe its face after it was done!

5. Frogs Are Better At Seeing Far

Frogs spend most of their time observing what is around them making one of two decisions:

Frogs need to make this life or death decision very quickly since they could be eaten if they do not move fast enough. If they think they saw prey, but actually spotted a predator, they may get eaten. If they think it is a predator, frogs may employ one of their many self-defense mechanisms. Having excellent vision is key to helping frogs make the right decisions at the right time.

Frogs can adjust their eyes like a camera lense to help them decide to eat or run. They are very sensitive to movement and are very good at deciding which action to take depending on what is around them. Frogs can also sense things with their skin, like vibrations in water or on land which also helps them in decision making (CTNF).

5. Frog’s Pupils Can Be Horizontal or Vertical

There are some exceptions to frogs having primarily horizontal or vertical pupils. Vietnamese Mossy Frogs have round pupils like humans, and Oriental Fire Belly Toads have heart-shaped pupils.

6. Frogs Can See in Color

Frogs can see in color and are particularly sensitive to tones of blue and green. Although their vision is wider than humans, it is more blurry and so colors tend to be more homogeneous and less defined compared to human vision.

Like many animals in the wild, frogs can see colors, but are more sensitive to certain colors compared to others. During the day, frogs can see some color, but certain tones are more prominent than others. They can see more than what humans can with regards to their field of vision, but their sight is more blurry.

You can compare what frogs can see in the daylight compared to humans in this really neat tool on this Yale University site.

7. Frogs Can See in Color in The Dark

Contrary to humans, frogs can see very well at night, and they can see in color. Even if it is pitch dark outside, frogs can observe their environment in tones of blue and green.

This is incredibly useful to frogs, especially those that are active hunters at night. No matter what, frogs are very sensitive to movement and have to quickly decide if what they noticed is a predator or prey. Having the ability to observe their environment in color while in the dark is an important advantage that can help them survive being eaten.

You can compare what frogs can see in the daylight compared to humans in this really neat tool on this Yale University site.

8. Some Frogs Have Red Eyes to Scare Predators

Red-Eyed Tree Frogs have red eyes to deter predators. Primary colors generally indicate poison in the wild, and although these frogs are not poisonous, their red eyes make them look much less appealing for predators to eat.

Having green skin that can camouflage, and covering their eyes with their nictitating membrane allows Red-Eyed Tree Frogs to become practically invisible when stuck to vegetation. If a predator gets close, these frogs can open their eyes to scare them. They may also have bright primary colors like red or blue on their legs which they may unfold to further deter predators.

Bonus: Toad Discovered With Eyes in Its Mouth

There was a toad discovered in Ontario, Canada with eyes in its mouth in the early 1990’s. This is not a normal condition and was said to be the result of a parasite infection or a macromutation that caused a gene-level adaptation.

The BBC attributed the cause to a parasite whereas scientists believe it was a macromutation. If you ask me, Hamilton Ontario is a pretty polluted city and so this could have been the cause of years of dumping waste into Canadian waterways, but that is just speculation. Very few observations of frogs or toads having their eyes in their mouth have since been made.

Do Frogs Close Their Eyes When They Sleep? Frogs close their third eyelid called the nictitating membrane during sleep in order to keep their eyes moist and to hide from predators. This membrane is partially transparent allowing frogs to detect movement if necessary.

Can Frogs Blink? Frogs can blink using their upper eyelid or their nictitating membrane and generally do so to to moisten their eyes like many other animals similarly do in the wild.

How are Frog Eyes Different From Human Eyes? Here are differences between frogs eyes and humans eyes:

How are Frog Eyes Similar to Human Eyes? Similarities between frog eyes and human eyes are that both frogs and humans can see in color and both humans and frogs have bifocal vision.

Are These Frogs with Eyes Inside Their Mouths Real? How else should a frog watch what it eats?, Dan Evon, 30 April 2021