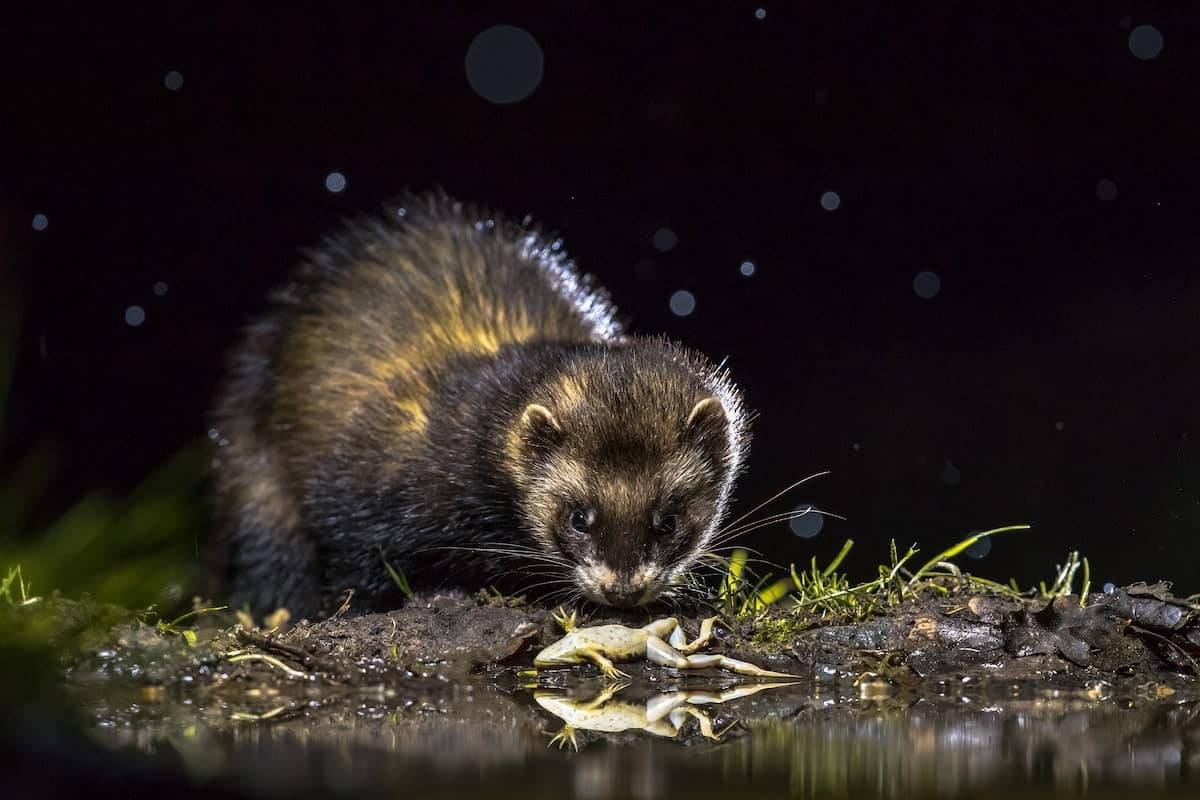 Frogs are far from the top of the food chain and have so many predators it may be hard to imagine how they can defend themselves. However, frogs employ a wide variety of very smart ways to protect themselves in the wild.

As a general rule, frogs defend themselves by puffing up their bodies, surprising their predators, playing dead, biting, screaming, urinating, using color, camouflage, and their well-built anatomy to jump, leap or swim away from their enemies.

Let’s have a closer look at each of these defense mechanisms used by frogs to scare away predators such as fish, birds, humans, and even monkeys.

Frogs Puff Up Their Bodies to Defend Themselves

Frogs have vocal sacks they use to attract mates in the Spring. But if a predator is in sight, one way that frogs defend themselves is by puffing up their bodies with air to look much bigger than they truly are and intimidate predators.

Frogs can fill their vocal sacks, and sometimes their entire bodies with air to look much bigger and much more imposing. This can help frogs look more aggressive, intimidating, or too big for predators to eat. This can surprise their enemy and deter them from attacking.

Frogs Can Surprise Their Enemy For Self Defence

Another way frogs can surprise their enemy is by using color to startle them. Some frogs have hidden colored spots in the folds of their skin or on their bellies. These spots actually look like eyes to predators. If it gets too close, a frog may suddenly raise to reveal the fake eyes on its belly and alarm a predator.

Some frogs will jump or vigorously dance by moving their legs left and right to catch a predator off guard. Sudden unexpected movement is sometimes a good way for frogs to startle a predator and scare it away.

Frogs Use Bright Colors to Avoid Being Eaten

Frogs may use colors to defend themselves in a few different ways:

Learn more about the colors frogs can be in this article on our blog.

Some Frogs Are Poisonous to Their Predators

Many frogs in South America are very colorful, but also very poisonous. Using bright primary colors is a way for frogs to warn their enemies that they are dangerous and not to be consumed.

Other frogs and toads have poisonous glands on their bodies that ooze if the frog feels like it is in danger. These frogs can cover themselves in a sticky toxic coating which can make the predator spit them out or die if they do wind up in their mouth.

Depending on the species, frog poison can burn, paralyze, cause respiratory issues, hallucinations, convulsions, or even death. Poisonous frogs can be very dangerous to humans and pets, and it’s important to keep your distance if you are unsure if the species is safe to handle.

Learn more about poisonous frogs in this article on our blog.

Frogs Camouflage to Hide From Predators

Frogs are masters of camouflage. Many frogs can perfectly hide in their surroundings by adapting the color of their skin to what is around them. Others are naturally the same colors as their environment.

Red-Eye Tree Frogs being some of the most famous frogs in the world, you may think it stands out like a sore thumb with its red eyes and green and yellow body. But this frog can stick very closely to leaves, become pale green, and blend in to look like it is not there.

Frogs May Scream or Squeak to Scare Predators

Some frogs scream when they are afraid, in danger, or if a predator gets too close. A frog scream may sound funny (watch the video above) but it can be an effective way for them to surprise a predator and deter it from attacking.

For example, the Desert Rain Frog will puff up like a little balloon and scream to scare its enemies. It is a tiny frog and its scream sounds more like a squeak from a dog’s toy, but if they are still here today and using this technique to scare predators, it must mean it works!

Learn more about the calls frogs make in this article on our blog.

A frog may put itself into stealth mode and play dead. It is one of the oldest tricks in the book, but reaming completely immobile for long periods is a way frogs defend themselves from predators.

In the video above, I found a Spring Peeper that played dead when I approached it. Frogs may mix a few defense mechanisms when playing dead including laying on their back, slowing down their breathing, and camouflaging. Predators look for movement when they are hungry and want to attack. If nothing is moving around them, they may move onto another spot (CTNF).

Learn more about frog predators in this article on our blog.

Frogs May Bite Their Enemy

Some frogs have a very strong bite, and some even have teeth. Biting is a defense mechanism frogs use to surprise, scare or harm their enemies. If a frog has to resort to this technique, it means the enemy is very near and they are close to being eaten.

Frogs May Urinate to Deter Predators

This may have happened to you. You picked up a frog or a toad, and it peed on you. It sure happened to me as a child, I know better now and you can learn how to avoid this problem here.

Urinating is used as a defense mechanism by frogs to cover their scent or repel an enemy. Frog urine smells and tastes bad to most predators. So if a bird catches a frog that urinates, the bird may drop the frog which can then quickly hop away to safety.

Learn more about what to do if a frog pees on you in this article on our blog.

Some Frogs Just Roll Away From Their Enemy

This is a very cool example of unique way frogs can defend themselves. The Pebble Toad cannot hop, so to escape from its enemies, it tucks its legs as close as possible to its body to turn into a little ball that can roll away from predators.

Rolling away is especially effective when the frog is at the top of a hill or mountain so it can use gravity and inertia to initiate and sustain its escape. The frog tightens all its muscles to absorb the impact, and since it is so small and weighs so little, this escape technique does not hurt them (source).

Frogs Can Jump Away From Predators

Other things that help protect frogs from predators have to do with their anatomy. Many frog species have long legs that allow them to jump, leap or swim away from predators.

Common Coquí are frogs native to Porto Rico that jump out of trees at dusk right when birds become inactive, and right before tarantulas start to feed, in order to eat and safely avoid predators.

Frogs Use Their Anatomy For Self-Defence

Often frogs will dive into the water to escape predators, especially if they are being chased by an enemy that does not swim as well as they do. Some frogs will bury themselves in the mud using their back legs to dig a hole in order to hide from predators. Some use their head as weapons to inject venom into their predators.

Some frogs are tiny and can easily hide in places predators would not think to look. Other frogs are huge and can somewhat bully their way out of being eaten thanks to their size and strength. For example, the Goliath Frog can grow up to 32cm. (13in.) in length from and weigh up to 3.25kg. (7.2 lb) putting it higher up on the food chain.

Frogs also have incredible vision with eyes that provide them a 360 view of what is around them, to help them avoid enemies before they get close.

Questions Related to How Frogs Defend Themselves

Why do Frogs Puff Up? Frogs puff up to repel mates, or surprise predators by looking larger than expected and avoid getting eaten. By filling their vocal sacs with air, frogs can expand to look larger and deter unwanted mating, startle or scare predators away.

Why do Frogs Scream? Frogs scream when they feel like they are threatened or in danger to warn or scare predators. The usual cause of a shrill, cry, scream, squeak or piercing shriek is to alarm predators which may include skunks, dogs, birds, lizards, or monkeys.

Do Frogs Bite? Frogs may bite if they feel scared, threatened, or in danger. Some frogs have a very strong bite, and some even have sharp teeth. Biting is a defense mechanism frogs use to surprise, scare or harm their enemies, especially if they are close to being eaten.

Do Frogs Play Dead? Frogs play dead by slowing down their breathing and camouflaging as a defense mechanism to hide from predators or seem less appealing to them. Predators look for movement and if a frog looks dead or immobile, a predator has fewer chances of attacking.

Why Do Frogs Pee When You Pick Them Up? Frogs pee when picked up as a defense mechanism to repel an enemy. A frog will pee if it is afraid and wants to escape. They do not like to be picked up as they absorb practically everything through their skin and salts, oils, soil, and lotions from our hands can irritate them.

What Do Frogs Do When Scared? When frogs are scared they may jump or swim away, puff up their bodies, try to surprise their predators using color, play dead, bite, scream, urinate, camouflage, or roll away. Some frogs are poisonous and will secrete a toxic coating around their bodies to avoid being eaten.