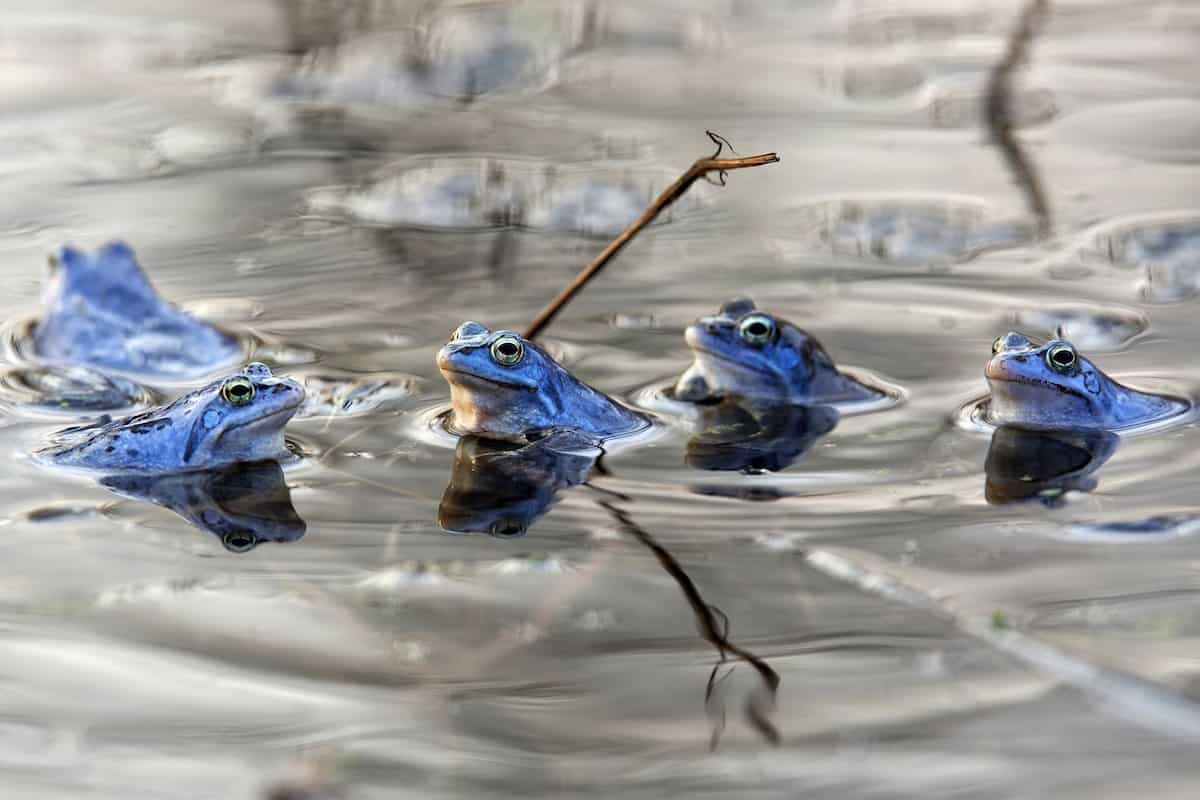 If you’ve ever met a frog, you may have been charmed by their cute faces and strange antics. Frogs are remarkable little creatures that can thrive in the wild and in captivity. But do they really have distinct personalities that can set them apart from each other?

Frogs have personalities that generally fall into one of three groups: Cowardly, Bold, and Relaxed. Frog personalities are something that sticks with them for their entire lives from tadpole to adult. Learning about their personality is a great way to become a better frog caretaker or observer.

Every frog has a personality! This glorious information for pet owners and frog enthusiasts alike. But what do the three main frog personality types entail, and how can we know which kind of frog you have?

Cowardly frogs are worried. They are especially afraid of being eaten. So if something unexpected happens, they will usually try to escape, hide or play dead. If you pick up a cowardly frog, high chances are it will pee on you. Don’t worry, it is a defense mechanism that will not give you warts. But definitely wear gloves and wither way wash your hands.

Generally, the smaller a frog is the more likely it is to be cowardly. Being cowardly is a defense mechanism since smaller frogs are often prey to all kinds of predators including birds, snakes, and other frogs.

However, larger frogs can sometimes have this personality type as well. Generally, the best way to tell if your frog has this personality is if they have a tendency to avoid new or unfamiliar things placed in their enclosure. If you grew up in the Pacific Northwest, you probably met this kind of frog hopping around on your lawn after a rainy day. They can be tough to catch!

Bold frogs are the opposite of cowardly frogs. They tend to be very curious about their surroundings, investigating each new object in their enclosure to see if it’s food. This is the kind of frog that may hop right up to your hand and let you pick it up. Bold frogs are generally confident friendly animals who might try to eat your thumb the first time they see it.

Larger frogs are more likely to be bold since they don’t need to worry about predators as much as small frogs. Generally speaking, the safer a frog fees, the less shy they may be.

Relaxed frogs are happy frogs. They can be seen generally just enjoying life. You may have seen one basking in a pond shaded by lilypads for hours, just waiting for food to pass its mouth. Therefore, such frogs are often ambush predators that wait for food to come to them.

Without a care in the world, relaxed frogs are beautiful beasts that hop about their day ignoring everything that they know won’t eat them. In essence, seem like calm, chill, and composed frogs.

Of course, these aren’t the only possible frog personalities. Some frogs may also display a mix of these three personalities, they may use one or the other depending on their environment, or they could be displaying a behavior totally unrelated.

In the video above I found a Spring Peeper that was afraid and played dead! I also found a bold frog that let me film it croaking.

Frogs spend much of their early life as a tadpole. People often change as they grow up, but what about frogs?

Frogs actually don’t change their personality as they get older. Experiments done on tadpoles as they grow tend to show that they hardly change at all.

This means that if you’re raising a frog from tadpole to adult you can be fairly certain that their personality will not change very much. You can trust your frog to be a rock in your life even when everyone else around you is going through big changes.

Isn’t it interesting how frog bodies change so much while their personalities hardly change at all.

The Purposes Of Frog Personalities In The Wild

Depending on the species of frog, the different personalities can serve all sorts of purposes from attracting mates to self-defense. Here are some examples of types of frogs whose personalities serve survival purposes (CTNF).

Poison Dart Frogs fall solidly into the category of bold frogs, their toxins protect them from pretty much all predators, so they don’t really have any need to be cowardly.

Personality is important to poison dart frogs when it comes to choosing who to mate with. Most species of poison dart frogs have elaborate mating rituals that tend to be initiated by the male frog. This courtship ritual favors frogs who are more curious and adventurous, both because this species involves finding multiple good locations to deposit eggs and because the frogs need to be able to find one another easily

Washington Treefrog Tend to Be Cowardly

I’m from Western Washington, so when I think of a frog I usually think of this particular kind of treefrog. Washington Treefrogs can live pretty much anywhere where there is enough water for them to breed. They are rather typical of the kind of frog you might find hopping around in your lawn.

In my experience, these frogs tend to be very nervous around anything bigger than themselves. This fear is generally good for them, as they are prey animals for all sorts of birds and small mammals. They also live in a world where they are surrounded by dangerous human machines.

American Bullfrogs Can Be Very Relaxed

American bullfrog may seem like they would be pretty relaxed animals, but in a lot of ways, they are actually quite aggressive especially to one another. Male bullfrog are quite territorial, and this can lead them to fight with other male bullfrogs who encroach on their space

However, in a situation where they don’t have much to stress about they can be very relaxed frogs. They really are unlikely to be bothered by what is going on around them as long as they have enough food, few predators, and shelter from the cold.

Let’s have a look at how some famous frogs in pop culture can help illustrate the different frog personalities we uncovered in this article.

The best way to learn more about frog personalities is to observe lots of frogs! Head out into the wild, look for frogs and try to recognize their personalities. Use our Frog Identification Chart to know which frogs you encountered.

“The Characteristics of a Bullfrog” Cuteness.com,