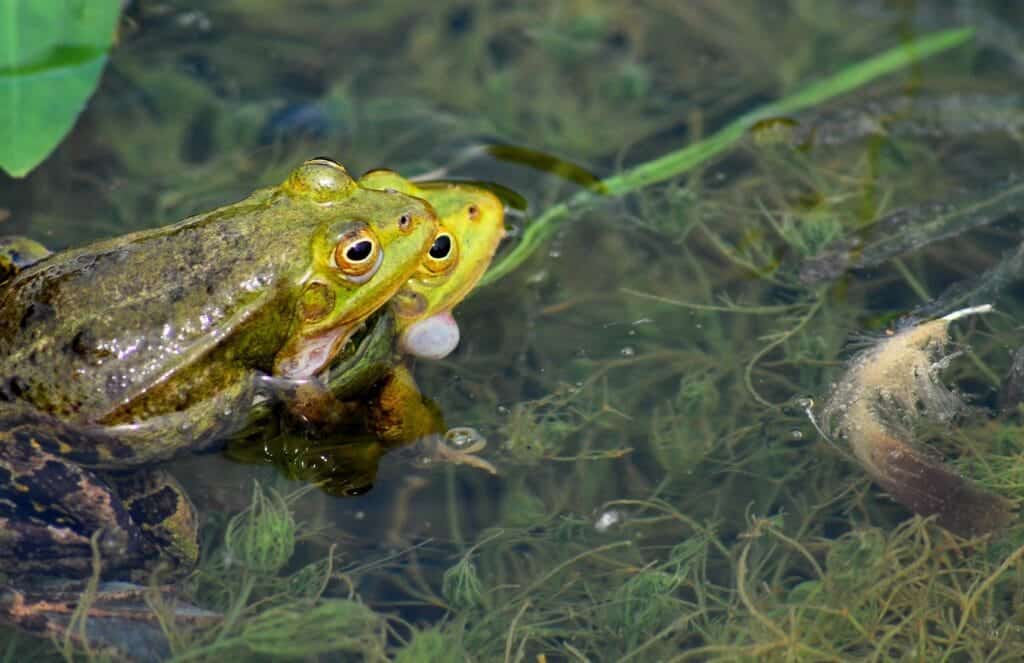 As a child, I always thought it was a bit confusing as to how frogs reproduce. I thought it looked like they would just sit there, hugging each other, a bit violently to be honest, waiting for some strange miracle to happen. But there is a lot more than just sitting and waiting going on when frogs mate.

As a general rule, frogs reproduce by amplexus through external fertilization. The female frog releases her eggs into the water and the male frog simultaneously releases sperm cells which fertilize the eggs.

Most Frogs Reproduce in The Spring

Most frogs reproduce in early Spring in the Northern Hemisphere which can take place as early as February to May depending on the location and climate. In the Southern Hemisphere, or where the climate is consistently warm and humid, frogs can reproduce at any time of the year.

Frogs generally like to reproduce and lay eggs when it is rainy and wet. Rain water replenishes dried ponds, lakes or bogs, providing more space for them to lay their eggs and for their tadpoles to thrive. Depending on where the frogs are located, Monsoon or Rainy Seasons may dictate when frogs reproduce.

Most frogs can reproduce once they are over the age of 3 or 4. When the Mating Season begins, adult males find the pond where they were born, or an ideal location to reproduce, and call out to attract female partners.

They fill their vocal sacs with air and expel loud sounds that can be heard up to 1km away depending on the frog species. Each frog species has a unique call to attract females of the same species. You can watch a Spring Pepper call out for mates in the video above.

Most Frogs Reproduce by Amplexus

Once the male frog has attracted a female mate, the couple will generally get into an inguinal or axillary amplexus position in order to reproduce. Most often, the male frog climbs onto the female’s back and clasps her around the waist.

Frogs have several amplexus postions but here are the two main types of amplexus frogs may use:

Male frogs generally develop large thumbs during mating season which help them remain in this position for the time it takes to lay and fertilize the eggs. Amplexus stimulates the female to lay eggs and can last a few hours to a few months depending on the species of frogs.

Male frogs may seem to try to reproduce with other males, dead females, other species and inanimate objects in amplexus, but are trying to find a suitable partner, generally quickly realized it is not a female they can reproduce with and move on.

Once male and female frog of the same species are in amplexus, and in water, the female releases her unfertilized ovum into the water while the male simultaneously releases sperm cells to fertilize them, rendering the eggs zygotes, or newly fertilized eggs.

Most Frogs Reproduce in Water

Most frogs lay their eggs in water and choose shaded, shallow areas in ponds, marshes, swamps or lakes to reproduce. Frogs generally lay 1,000 to 20,000 eggs depending on the species.

If you’ve ever found a mysterious patch of slime with dots in them, maybe you wondered if those were actually frog eggs. Frogs lay their eggs in a variety of different bodies of water including lakes, ponds, marshes, bogs, swamps and even in puddles. This is because most frog eggs require water to survive.

While most frogs do lay their eggs in water, some frogs can lay their eggs on the land or in trees. Male frogs may try to lure the females in trees and away from heavily male-populated areas. This increases the male’s probability of fertilizing eggs.

“Biologists noticed an apparent linear progression toward more terrestrial reproduction throughout frog evolution and proposed that frogs avoid putting their eggs and tadpoles in streams or ponds because they would be more vulnerable to aquatic predators.”

This quote suggests that some frog species are evolving to lay their eggs on land. Laying eggs on land provide frogs more hidden areas to hide from predators. Although, they still need to be close to wet, humid areas since frog eggs absorb the water around them to form their protective membrane. Without water they risk drying out and dying (CTNF).

How Many Eggs Can Frogs Lay Per Reproductive Cycle?

Female frogs can lay 2 to 20,000 eggs during reproduction depending on the climate and species. Frogs lay a large amount of eggs to increase their chances of survival since few will become tadpoles and many will be eaten by predators or die of external or natural causes.

Here is how many eggs frogs can lay during reproduction depending on the species:

A group of frogs eggs is called frogspawn, spawn, or a clutch. How many eggs a frog can lay per reproductive cycle varies depending on the species, the frog’s health, and the climate. For example, a healthy the Northern Leopard Frog can lay up to 5,000 eggs whereas American Bullfrogs can lay as many as 20,000. These frogs generally live in climates that have a Winter and so they hibernate part of the year.

Dart frogs generally live in tropical climates where they can be active all year and reproduce more frequently. However, they lay much less eggs than most species. Let’s have a look at how often some frogs reproduce.

How Often Do Frogs Reproduce?

Most frogs in the Northern Hemisphere including Bullfrogs, Spring Peepers, and Common Frogs reproduce once per year and hibernate during Winter. However, many Dart Frogs and Tree Frogs in humid and Tropical climates reproduce 3 or more times per year.

Here is a chart detailing how often certain species of frogs reproduce per year:

How often frogs reproduce is influenced by climate, temperatures, humidity, and seasons. Where there is a long Winter, frogs tend to reproduce less often because they spend a good part of the year underground hibernating. Where the climate is tropical and consistently warm, frogs can generally be active and reproduce more frequently throughout the year.

Exceptions to How Frogs Reproduce

Not all frogs lay their eggs in water, reproduce by amplexus or use external fertilization. For example Bombay Night Frogs lay eggs in trees, and female Fanged Frog reproduce internally.

Here are some exceptions to how most frogs reproduce:

So the way in which frog eggs are produced, laid and protected can be quite unique to the frog species.

Frog Eggs Are Vulnerable to Many Predators

Frogs lay thousands of eggs because some of them may not get fertilized during reproduction, others will be eaten by predators, and many will die of natural or external causes. Climate change and urbanization are important external causes that is threatening frogs. Diseases and lack of water cause tadpoles to die or become stunted in their growth due to lack of space.

Most frogs do not stay with their eggs to protect them, leaving them vulnerable to predators.

Contrary to adult frogs that have sophisticated ways to avoid predators, frog eggs have no self defence mechanisms. Predators attack and eat frog eggs that are very nutritious and easy to find.

Questions Related to How Frogs Reproduce

How do Frogs Reproduce? Frogs reproduce through external fertilization meaning that male frog’s sperm fertilizes female eggs outside of the female’s body. The female releases her eggs into the water and the male frog simultaneously releases sperm cells which then fertilize the eggs.

How Can You Tell if a Frog is Pregnant? Frogs do not get pregnant since they reproduce externally. Female frogs naturally carry thousands of ovum that they release into water during amplexus for a male frogs fertilize. Frogs do not carry their offspring inside their bodies like most mammals so they cannot get pregnant.

Why Do Frogs Hug Each other? Frogs “hug” each other in amplexus, a position in which frogs reproduce. Once mating season begins, a male frog will call and attract a female frog, climb onto her back and clasps her around the waist to start the reproductive cycle.

What are Frog Eggs Made Of? Frog eggs are made of a female frog’s embryo that is fertilized by a male frog’s sperm. Most frog egg are laid in water that they quickly absorb to form a protective jelly around them that allows them to cluster together.

How Long Does it Take for Frogs to Reproduce? Generally it can take frogs a few hours to a few days to reproduce. Some frogs were found to take 5 seconds to 2 months or more to reproduce, although during longer periods amplexus but little fertilization may take place.

What Does Frog Spawn Look Like? Frogspawn looks like a big jumble of clustered, round, jelly-like chia seeds balls with a black dot in the middle. The black dot is a future tadpole and the cluster is a clutch of frog eggs generally found in small bodies of water.