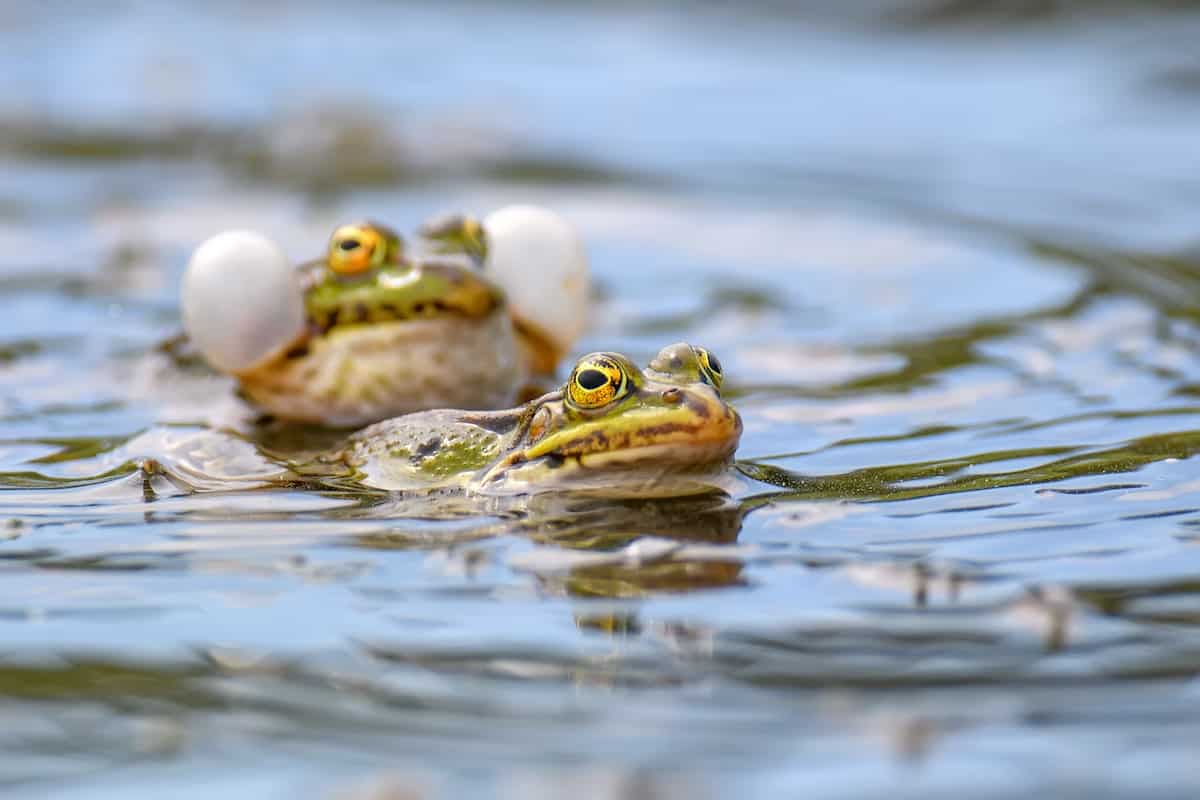 There are numerous mating traditions and positions throughout the animal kingdom, and amphibians use one of the most interesting types: amplexus. The position in which frogs reproduce can be perplexing for many frog enthusiasts since the use and form of amplexus can differ depending on the species.

While frogs generally use amplexus for mating, there are still many notable considerations and variations between species. Join me as I discuss what amplexus is, why frogs use this position to reproduce, and when these reproductive practices may differ between frog species.

Amplexus is a sexual reproductive position taken on by frogs in order to reproduce externally. Generally, a male frog is on a female’s back, sometimes clasping her to stimulate the release of her eggs. Once she starts to release her eggs, the male begins fertilizing each one with sperm cells.

When Does Amplexus Take Place?

Frogs generally mate in amplexus during the Spring, the Wet or Monsoon season.  Male frogs generally attract females with their species-specific croaks and calls during mating season and get into amplexus once in freshwater.

Once a male and a female are together and in water, the male climbs onto the female’s back to get into amplexus and start the reproductive process. Frogs generally need to be at least 3 or 4 years of age to reproduce properly. Most frogs reproduce in rainy and wet weather since rain presents ideal reproductive weather frog frogs that breathe and drink through their skin (CTNF).

Where Does Amplexus Take Place?

Most frogs select shaded, slow-moving, freshwater bodies for amplexus provided that the environmental conditions support the reproductive process and the development of fertilized eggs.

How Often Do Frogs Reproduce in Amplexus?

Most frog species, including many species within the Northern hemisphere, reproduce once a year during mating season. However, some frog species can reproduce 2 or more times per year. Such species include many frogs living in humid tropical parts of South America.

Depending on the species, amplexus can last a few hours to a few weeks. Some frog species can take a few minutes to reproduce, while it can take days or weeks for other species. Female frogs are stimulated to lay eggs during amplexus, and male frogs develop physical adaptions to aid the process.

Males generally experience specific adaptions during mating seasons, such as enlarged thumbs (nuptial pad), or brightly colored skin. Developing enlarged thumbs helps the males maintain the assumed position during amplexus, ensuring that the reproductive process is efficient. Some frogs change color to make it easier to distinguish females from males.

The female frog can release hundreds to thousands of eggs depending on the frog species, and most frog species can release anywhere from 2 to 30,000 eggs at a time. The frog eggs are fertilized by the male sparking the beginning of their metamorphic journey from zygotes to mature frogs.

There are 10 known amplexus positions including Inguinal, Axillary, Cephalic, Head Straddle, Glued, Gular, Lose, Scapular, Independent, and Dorsal straddle. However, the most common amplexus types are Inguinal and Axillary.

Inguinal Amplexus describes the process where the male clasps the female from behind with his forearms, using her waist as support. The name was gained since the waist section of a frog is known as the inguinal region. This position helps stimulate the female’s egg release.

Axillary amplexus describes the process where the male will grasp the female from behind using her forearms for support. The name was gained since the forearm section of a frog is known as the axillary region. This position also helps stimulate the female’s egg release (CTNF).

The remaining amplexus positions are less common and their use is generally dependant on the species. The use of other positions also depends on sexual dimorphism and intersexuality in frogs.

Do All Frogs Reproduce The Same Way?

Some frog species may exhibit unusual or abnormal amplexus practices. Such cases include ‘breeding balls’, where multiple males clasp onto one female, or cases where males attempt to partake in amplexus with deceased females or inanimate objects.  This is common because most frogs use a trial-and-error process to find suitable mates.

More About Frog Reproduction And Amplexus

Learn more about frog reproduction and amplexus on our blog: