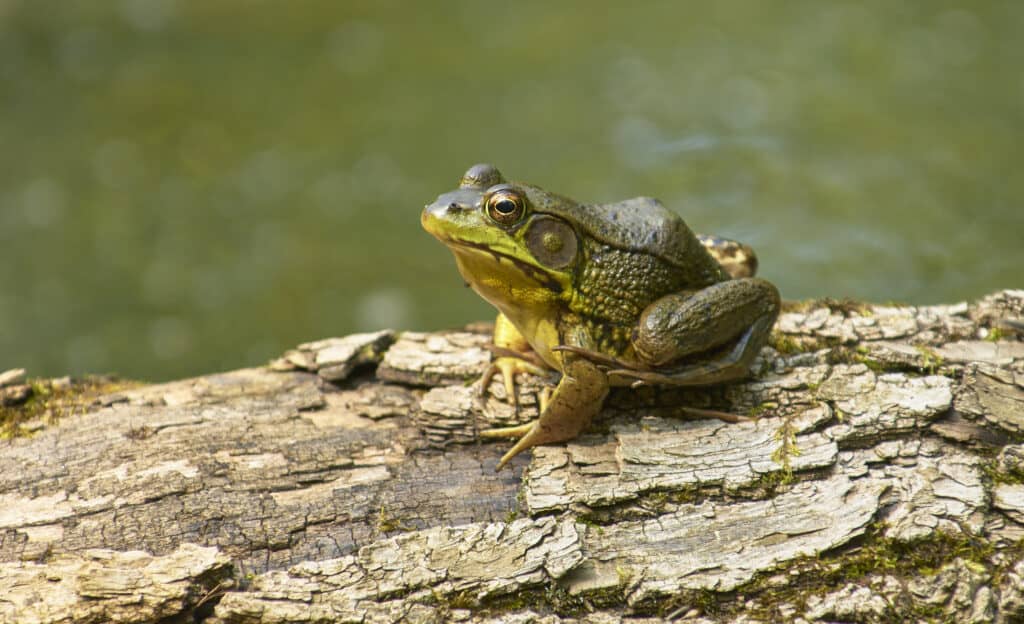 Frogs are incredible animals and are often also incredible hunters. Different types of frogs have a vast array of prey and can take down some unlikely animals. After seeing what a frog can eat, you may wonder if a frog is capable of eating a snake.

Generally larger species of frogs eat small snakes. Often, smaller frogs do not eat snakes since such prey is too large to fit into their mouths. Large frogs generally prefer to eat less venomous snake species but will try to bite anything that crosses their path, even 2 foot long snakes.

Different snakes fall victim to frogs all over the world. This post will take a more in-depth look at these snake eaters, as well as the types of snakes that they are capable of eating.

Types of Frogs That Eat Snakes

There are several types of generally large frogs that can eat snakes including the American Bullfrog and the Australian Tree Frog.

American Bullfrogs eat a wide variety of prey and seem to be willing to try to take a bite out of just about anything (including a human finger!). This definitely includes any snakes that might cross their path. The most common snake a bullfrog might try to eat is a young Garter snake. These snakes aren’t overly dangerous, usually aren’t venomous, and the young ones are the perfect size for Bullfrogs to pounce on.

Bullfrogs don’t seem to limit themselves to only this category of snake though. A story from the University of Arizona stated that full-grown snakes in an area with Bullfrogs will have scars on their tails from bullfrog bites. There are also accounts of Bullfrogs eating full-grown male Garter snakes, which means that these frogs can swallow a snake that’s as much as 2 feet long.

With the ability to eat something that size, you may wonder exactly how big of a snake a Bullfrog could manage to eat. American Bullfrogs are big frogs and weigh 2 to 3 pounds when they are fully grown. That means that a full-grown Garter snake will weigh about 15% of the frog’s total body mass. However, Bullfrogs will eat in excess if given the chance, so it is possible that they might eat a great deal more than that.

There are reports of Bullfrogs eating as much as a third of their own body weight, which could be close to a full pound. At that weight, a Bullfrog might eat a snake as large as the venomous Copperhead, especially if it can find a young one that is weaker and easier to catch. Bullfrogs also eat mice and bats! Check out our detailed list of meats that frogs eat.

Another frog that commonly eats snakes is the Australian Green Tree Frog. These frogs only grow to about 4 inches in length, but that doesn’t stop them from taking on snakes for their meals. While their diet is primarily insect-based, this frog can eat much more.

When Australian Green Tree Frogs eat snakes, they generally eat small, non-venomous snakes which make for a big meal. There are, however, accounts of these frogs eating more dangerous prey – specifically the Coastal Taipan Snake. This snake is one of the most deadly in the world, but one photographer was able to capture an Australian Green Tree Frog eating one of these snakes on camera.

The process for both of these snakes is the same. They take in the snake and swallow it whole. You may wonder why the snake does not attack them from the inside, which is a perfectly reasonable question. The stomach of a frog is made of strong muscle, which constricts the snake and keeps it from moving. From there, the frog simply has to close its mouth and keep it shut while the snake inside suffocates.

Other Frogs That Eat Snakes

Other than American Bullfrogs and Australian Tree Frogs, other frogs that eat snakes include African Bullfrogs, Goliath Frogs, and Argentine Horned Frogs. For example, Goliath Frogs are the largest frogs on earth and can grow up to 32 cm (12in) in length from snout to vent, and weigh up to 3.25 kg (7.7lb). These frogs feed on snakes and a wide variety of large prey.

Frogs that eat snakes generally consist of larger frog species, and Bullfrogs and Argentine Horned Frogs are mainly ambush predators. This means that these kinds of frogs like to sit and wait for their prey to come to them. They may seem a bit lazy, but are extremely ferocious predators that catch their prey off guard and lick it up live and whole.

These two types of frogs are incredible predators, and their ability to take down snakes is nothing short of incredible, but that is only half of the story. It is true that some frogs can eat snakes, but most cannot. In fact, in most circumstances, the roles are actually reversed since snakes are frogs predators (see more predators here), and often the frogs are the ones that get eaten.

Most frogs have some kind of toxin in their skin. This is a natural defense mechanism because they are vulnerable to predators. Bullfrogs commonly fall prey to all sorts of animals, including water snakes. While Bullfrogs are capable of eating snakes and have some really cool defence mechanisms, they frequently fall victim to them.

Just like the Bullfrog, the Australian Green Tree Frog has a whole host of predators, among them are several different types of snakes. That venomous snake that a Green Tree Frog ate just as easily could have managed to take down the Green Tree Frog. They are more vulnerable than their snake-killing abilities would indicate (CTNF).

This only scratches the surface of the relationship between frogs and snakes. Snakes are some of the biggest predators for frogs in the wild. Most frogs primarily eat insects, while snakes tend to go for much larger prey. There is a specific type of snake, the Small-Banded Kukri, that will actually eat out a frog’s insides while the frog is still alive. Frogs have to be able to eat their prey live and whole, so they are at a disadvantage from the start.

Learn more about what meats frogs eat in this article on our blog. We also have a detailed article about what frogs eat depending on their lifecycle stage.

More About What Frogs Eat

Be sure to feed your frog a varied diet if you have a frog in captivity and be kind and gentle while observing frogs eating in the wild.

Learn more about what frogs eat and how in these guides on our blog:

Do Frogs Eat Small Snakes? As a general rule, small frogs eat a small snakes, and a large frog can eat a larger snakes. A frog will eat whatever fits into its mouth, so if the snake is smaller than the frog, it will probably try to eat it.

How Can a Frog Kill a Snake? Frogs kill snakes by catching them off guard and swallowing them live, and whole. The snake gets wrapped up into the frogs sticky tongue. It cannot move and suffocates in the frogs stomach.

Can a Bullfrog Eat a Snake? Bullfrogs can eat snakes and generally prefer to snack on smaller, non venomous snake species, although a bullfrog has been documented eating a 2 foot long snake.

Do Frogs Attract Snakes? Frogs may attract snakes to a garden or backyard since frogs are prey to snakes. Snakes eat large amounts of amphibians including newts, salamanders, frogs and toads.

Story from the University of Arizona