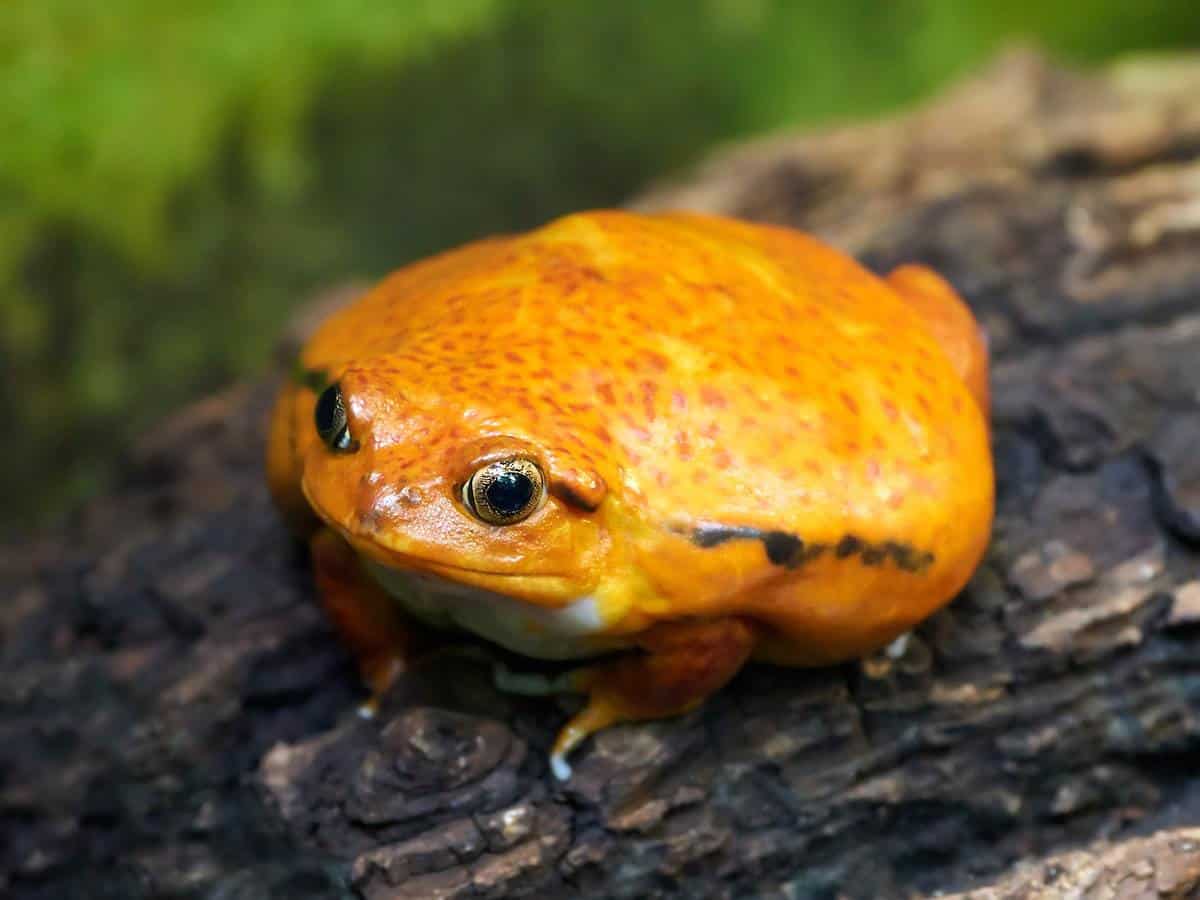 Frogs go through a long and wonderful evolution from eggs, to tadpoles, to toadlets to large adult frogs and so their size greatly varies throughout their lifecycle.

There are currently 7,360 documented frog species and so there are many different frog shapes, sizes and weights to consider. Some adult frogs can be tiny, smaller than the tip of an adult human’s pinky finger. Other frogs can grow to the size of a small house cat! Let’s have a look at how big frogs can get in more detail.

Here is a table that details the average frog size per species of frog based on weight and SVL. Snout to Vent Length (SVL) is a measurement taken in herpetology and in this case, measurements are taken starting at the tip of the frog’s nose to the most posterior opening of the cloacal slit (vent).

Tree Frogs and Poison Dart Frogs tend to be smaller, around .59 in (1.5 cm) and weigh about 1 oz (28.3 g), because they need to be light since their primary environment is among the trees, sticking to leaves and branches.

Dart frogs can be found in the Amazon forest. They are tiny frogs that are extremely colorful but also very poisonous. Although they do not have many predators due to their poisonous nature, they do not grow very large in size. This allows them to easily hide in trees and on leaves.

As a general rule, tree frogs are medium-sized frogs that measure .05 in to .2 in (1.5 cm to 6 cm) and weigh .03 oz to .24 oz (.9 to 7g). However, there is a wide variety of tree frogs including Gray Frogs, Spring Peepers and Australian Tree Frogs that can be more or less large.

Within the world of tree frogs, Spring Peepers tend to be fairly small at only 1.24 in (3.15 cm), and .03 oz (.9 g) on average. Whereas Australian Tree Frogs can grow fairly large at 4 in (10 cm). But compared to Poison Dart Frogs, or Bullfrogs, Tree Frogs are average sized.

Bullfrogs are generally large frogs that can be found in high numbers in the Eastern parts of North America and in parts of Africa. American Bullfrog average 6.5 in (16 cm) and 11.64 oz (330 g).

Bullfrogs eat large prey like mice, snakes, small birds and small bats. They can also eat guppies, minnows, and smaller frogs. Their weight and size allows them to have less predators and eat more of whatever crosses their paths.

How Long Do Frogs Take To Grow To Full Size?

As a general rule, it takes frogs 2 to 4 years to become adult frogs, to reach their full size and reproduce. The exact amount of time for them to fully grow depends on the species and the climate in which they live.

Frogs go through four main stages of evolution throughout their lifecycle (you can learn more in our detailed guide here). Once frogs reach adulthood, they generally have grown to their full size, can mate and reproduce.

Some frogs continue to grow depending on what they have to eat around them. If there is an abundance of food and few predators, frogs can grow very large very quickly and live longer than if there was more danger and less food around them.

The size a frog can grow to is influenced by a number of factors including lifecycle stage, species, diet, environment, climate, predators, and gender.

Let’s have a look at each of these factors in mode detail.

Frogs go through metamorphosis from eggs, to tadpoles, to toadlets to large adult frogs and so their size greatly varies throughout their lifecycle. You can learn more about how the size of a frog varies based on its lifecycle stage in our detailed article on the topic. But let’s continue to focus on how large frogs can get based on once they reach adulthood.

Frog Size is Influenced by Species

Genetically, depending on the type of frog, their DNA has them programmed to grow to a certain size. Like we have already discussed, Poison Dart Frogs tend to be small, whereas Bullfrogs are very large. Finding a Dart Frog the size of a Bullfrog would be a very strange occurrence, as would be the opposite since genetically they do not grow that large.

Frog Size is Influenced by Diet

If there is an abundance of food where the frogs live, and few predators around, they can grow very large. Large frogs can eat large prey and therefore have the opportunity to grow even bigger in size.

Amphibians can be overweight so this is something that can happen to frogs, especially larger species. This is especially true since frogs can’t help but pick up anything that crosses their path and that is smaller than their mouth but big enough to see.

Frog Size is Influenced by Environment

The environment in which frogs live are impacted by climate, seasons, human activity and the predators around them. Let’s have a look at each in more detail.

Climate plays an important role in the size frogs can grow. Many of the frogs in the rainforest are actually fairly small, and they are active all year since the climate is perfect for them to thrive and fairly stable all year long. In North America, you can find a good mix of small, large and medium sized frogs that are active in the Spring and Summer, but less active in the Fall and Winter.

The Seasons in which frogs live by plays a big role in their size and weight. For example, frogs that live in Canada and the Northern States of the US will bulk up all Summer until Fall. If they calculated things right, they will be pretty large by the time it is time to hibernate for the Winter! Frogs will burrow underground and emerge much skinnier in the Spring. And the cycle begins again.

Human activity can play a role in influencing frog size. Urbanization, pollution, and destruction of habitats can force frogs to change their mating habits, or die trying. Polluted water can genetically modify frogs, stunt their growth, or kill them. It’s very important to care for our environment and protect vulnerable species.

If frogs are surrounded by thousands of predators and have few places to hide, it’s a recipe for disaster. Although frogs have hundreds of awesome defense mechanisms (check them out here 🙂 they do not always work. On the other hand, if there are none or very little predators, frogs can thrive and will eat anything that moves past them and can fit into their mouth!

Frog Size is Influenced by Gender

Due to mating by amplexus the male frog can be on the female frog’s back for quite some time. So it is naturally better for the male to be lighter and sometimes smaller than the female frog who has to carry him around during mating season.

What Is The Smallest Frog In The World? The smallest frog in the world is the Paedophryne Amauensis, it is .3 in (.77 cm) SNV as an adult, which is about the size of a housefly, a human pinky fingernail, or as small as a quarter of an American dime.

What is the Largest Frog Ever Recorded? The largest frog ever recorded was the Beelzebufo which is an extinct prehistoric frog that would be almost twice the size of the living Goliath Frog at 16.7 in or 42.5 cm.

What Is The Largest Non-Extinct Species Of Frog? The largest living frog species on the planet is the Goliath Frog that can grow to 12.5 in (32 cm) in length and can weigh up to 7.2 lb (3.3kg). Goliath frogs can grow larger than a rabbit or a small house cat.

How Much Does The Smallest Frog Weigh? The world’s smallest frog is the Paedophryne Amauensis and although it’s weight was not specified by the researchers that found it, it probably weighs less than .01 oz or .2 g. It measures .30 in or .77 cm and is about the size of a quarter of an American dime.

Amphibian Species By the Numbers