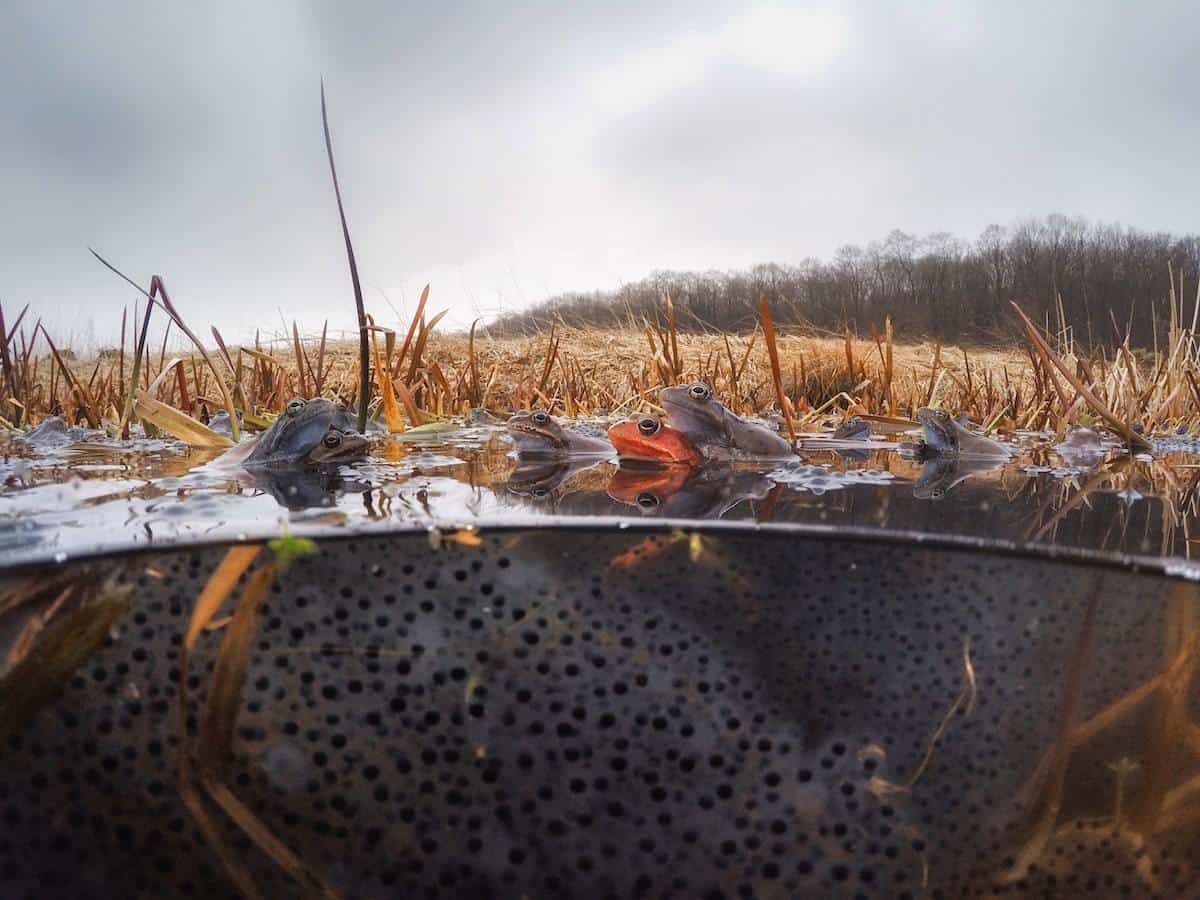 As a general rule, the frog life cycle consists of 4 main stages: 1. Egg, 2. Tadpole, 3. Froglet, 4. Adult Frog. The evolution through these stages is called metamorphosis and complete transformation can take up to 28 weeks depending on species and climate.

Although there are fascinating exceptions to how frogs develop depending on the species, let’s first have a look at what this lifecycle looks like for most frogs.

Learn more about how long frogs live and what influences longevity in this article on our blog.

As a general rule, a frog egg is an embryo laid by a female frog that is simultaneously fertilized by a male frog during reproduction. The resulting zygote goes through cell division and embryonic development to later transform into a tadpole.

While being laid, frog eggs absorb water around them to form a jelly. This allows the eggs to cluster together and grow in size. This jelly enclosure allows eggs to stick to vegetation and ground themselves to avoid floating away. The jelly also enlarges the eggs making them too big for certain predators while protecting them from bacteria.

During this stage, the frog feeds off of its yolk supply while its internal organs begin to form along with its gills. The transformation to a tadpole is initiated by the Thyroid hormone and it can take 3 to 25 days for frog eggs to hatch into tadpoles. Frogs lay eggs in clusters whereas toads lay eggs in strings.

Tadpoles, also called polliwogs, are the aquatic larval stage of frogs that evolved from eggs after 3 to 25 days. They measure about 40-45mm and live in water. Tadpoles evolve as tadpoles for 14 to 16 weeks depending on the species and the climate in which they live.

At the beginning of this stage, tadpoles generally stick to vegetation, breathe through their skin and feed on the remaining yolk of their egg that is located in their gut while their gills, tails, and bodies still develop.

At the end of the tadpole stage, the frog’s hind and front legs begin to grow, the tail starts to disappear through the process of apoptosis, or programmed cell death. Late tadpoles begin to develop lungs to breathe on land (CTNF).

Check out the video above where I found a baby frog that was in between the stages of being a tadpole and transitioning to a froglet. It looks like a tiny dinosaur with a tail and could be initially confused with a salamander.

A froglet is a tadpole that completed the last stage of metamorphosis and is now a young frog. Froglets have legs, lungs, and a tail that will eventually disappear through the process of apoptosis. A froglet can live above water and is small compared to an adult frog.

At this stage, the frog can leave the water and live on land for short periods of time. Contrary to toads, the frog will still need to remain close to bodies of water to survive, but it can hop around and swim away from predators using its growing legs.

A froglet will slowly lose its tail and grow bigger with time. It can et bugs and other invertebrates. Depending on the species and the stage of development, froglets could also start to eat small rodents.

At the stage of adulthood, frogs no longer have their tail and eat insects and invertebrates. It will take a froglet about 4 years to become an adult frog that can reproduce.

Adult frogs have sophisticated defense mechanisms making them much less vulnerable to predators than frog eggs or tadpoles. Adult frogs can live up to 40 years in captivity. However, they generally tend not to live as long in nature due to the abundance of predators.

Exceptions to The Common Frog Lifecycle

Most frog lifecycles are as described above. Frogs lay thousands of eggs, knowing they are very vulnerable to predators and count on high egg counts for survival. However, some frogs have different, yet incredibly fascinating ways they lay and hatch their eggs.

African Bullfrogs spawn in small pools near larger bodies of water and are protective of their tadpoles. The male watches over them until he can clear the way for the tadpoles to join a larger pond.

Tropical frogs are known to have different reproductive habits as well. Many Poison Dart Frogs also lay eggs in different puddles to increase chances of survival, and feed their tadpoles during the day remembering exactly where all the eggs were deposited.

Female Gastrotheca Ovifera frogs carry their eggs on their backs, while others also carry their tadpoles on their back. Darwin’s Frog eggs are ingested by the male who carries them in his vocal sac until they hop out of his mouth a few weeks later (source).

Find out more about the frog life cycle on our blog in the following articles:

What Are The Frog Life Cycle Stages? As a general rule, frogs have 4 main stages within their lifecycle, including 1. Egg, 2. Tadpole, 3. Froglet, 4. Adult Frog. The process of evolving through these stages is called metamorphosis and can take up to 28 weeks depending on species and climate.

How Long is Frog Life Cycle? The complete frog lifecycle from egg to adult frog can take up to 28 weeks depending on species and climate. It can take 3 to 25 days for an egg to become a tadpole, 14 to 16 weeks for a tadpole to become a froglet, and 6 to 9 weeks to reach adulthood.

What is a Froglet? A froglet is a tadpole that has completed the last stage of metamorphosis and is now a young frog. Froglets have legs, lungs, and a tail that will eventually disappear. A froglet can live above water and eat bugs but is still transforming into an adult frog.

What Is The Difference Between a Frog and a Froglet? A froglet is a small amphibian in the order Anura that completed metamorphosis from a tadpole but is still completing its development to adulthood. A froglet may still have a tail, whereas adult frogs have completed their transformation and no longer have a tail.

Why Are My Tadpoles Not Eating? As a general rule, it is normal that tadpoles do not eat during a certain period of their growth. This is a natural occurrence notably near the end of its transformation to a froglet where it will begin to eat insects.

Why Are My Tadpoles Not Becoming Frogs? Tadpole transformation is initiated by the Thyroid Hormone, and in some rare cases where tadpoles lack the hormone, they will remain at this stage of growth and will not evolve into froglets.

Why Are My Tadpoles Dying? Tadpoles may die if they lack key nutrients and environmental qualities such as unpolluted water, algae and other plant-based foods to feed on, and the presence of few predators.