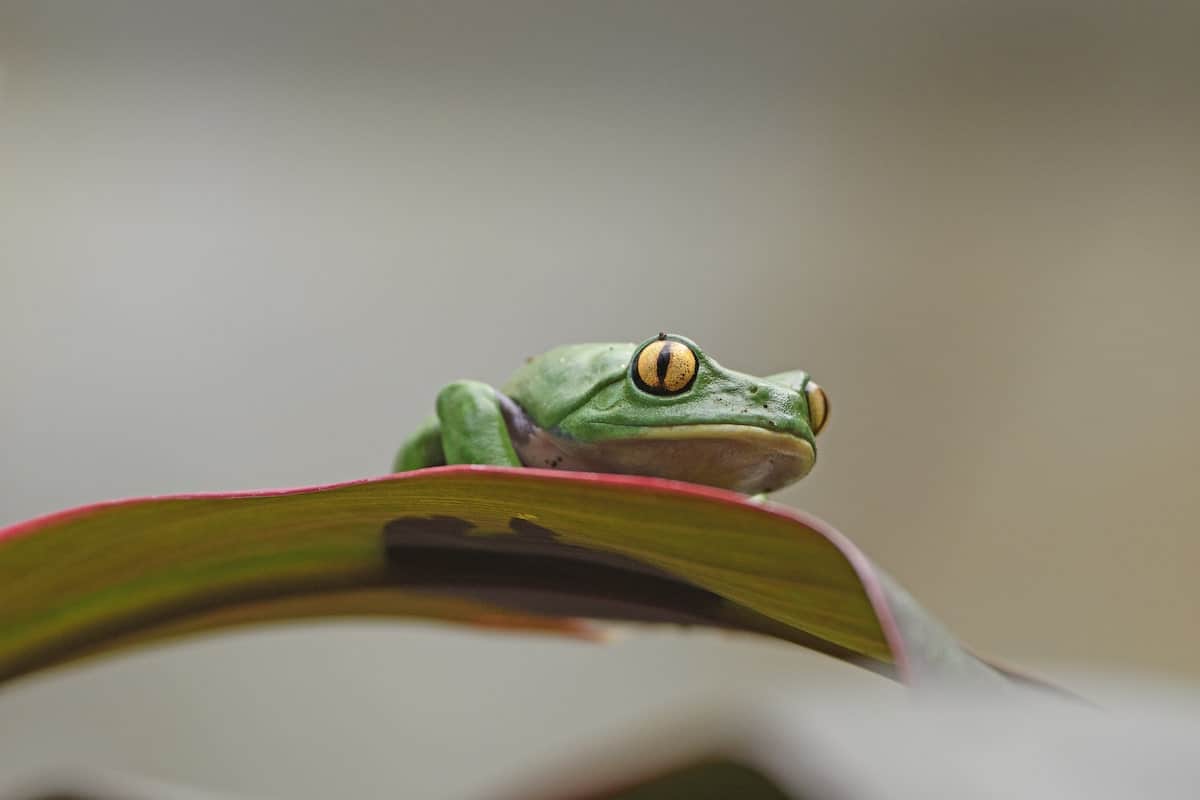 As a child I knew that frogs are insectivores, and as an adult with the same passion for these amphibians, I learned that they can actually be ferocious carnivores. Carnivores are animals whose food and energy requirements derive from animal tissue or meat.

Frogs are obligate carnivores meaning that they cannot survive without meat in their diet. Adult frogs eat insects, small mammals, small amphibians, small fish, and small birds. Frogs are omnivores as tadpoles and transform into carnivores as adults.

Let’s have a deeper look at what meat frogs eat and how they choose their prey. We will also look at a few exceptions to the rule since there is a species of frogs that is an omnivore (eats both plants and meat).

Frog Diet Depending on Lifecycle Stage

Tadpoles are omnivores, feeding primarily on plants (algae) but also on small phytoplankton and other tadpoles. However, once froglets and adult frogs, the vast majority of frogs are only carnivores.

Carnivores eat meat, which consists of muscle. Insects have muscles to jump, crawl, climb and move. Therefore, insects are considered meat and they make up the main part of a frog’s diet.

Frogs will eat any bugs that are live and fit into their mouth. It is common for small frogs to feed on bugs because of their small bodies. Frogs will eat larger prey as they grow.

Large frogs eat small mammals including rats, mice and bats. If the prey is moving and smaller than the frog, it will wrap the mammal up into its tongue and swallow it whole, live.

Frogs use their eyes to push it down into their stomachs. If the frog has teeth, they may bite, swallow and use their teeth to keep the prey back.

Frogs are cannibals meaning they will eat other frogs from different or the same species. A 2015 study led by G. John Measey found that “large invasive frogs that live in forests with high anuran diversity are most likely to have a higher proportion of anurans in their diet.”

Frogs eat smaller amphibians including salamanders, caecilians, as well as other frogs and toads. All frogs are cannibals, but larger frogs were found to eat a greater proportion of other frogs.

Frogs will also eat tadpoles, even their own tadpoles that they laid in the pond themselves! And this cannibalistic nature comes into play very early in the lives of frogs, as tadpoles may also eat other tadpoles if the environment does not contain enough plant-based food for them to feed on.

This may come as a surprise but frogs will eat some of their biggest predators if they are smaller than them in size.

Frogs eat smaller snakes, turtles, crocodiles, alligators, geckos, and lizards. Although most reptiles are predators to frogs, if the predator is live and smaller than the frog, it will gladly eat the reptile.

I must admit, I was surprised when I learned this. Bullfrogs are ferocious predators that hunt at night and can eat baby alligators in Florida for example. They have a powerful leap and will lunge at anything that is moving, is smaller than them, and passes by their mouth.

It is a bad idea to keep your pet frog in an aquarium with other small fish because your frog will gladly eat your other pets.

Frogs enjoy eating small fish including brine shrimp, goldfish, guppies and minnows. Therefore, do not keep frogs in a tank with other aquatic animals that are smaller than them since there is a chance the frog will eat them.

Frogs can live in outdoor ponds with certain types of larger fish that they generally do not eat including Koi and Orfe. Frogs do not eat fish eggs since they like to eat live and moving prey and fish eggs are immobile, but they can eat fish offspring once they hatch.

Large frogs may eat smaller birds of any species that get too close to them. These include common birds such as bluejays, robins, woodpeckers, bluebirds, finches, sparrows, and chickadees.

Generally, if the prey is moving, is large enough for the frog to see, but small enough to fit into its mouth, the frog will try to eat it (CTNF).

Are There Any Vegetarian Frogs?

There are no vegetarian frogs since the vast majority of frog species are carnivores.  However, the Izecksohn’s Brazilian Treefrog is an omnivore since it mainly feeds on plants and small fruit when available, and bugs when the trees do not bear fruits.

The Izecksohn’s Brazilian Treefrog is the only known frugivorous frog in the world. We are still discovering frogs to date and so maybe someday we may discover a vegetarian frog. But the vast majority of Anura (frogs and toads) are carnivores.

Do Frogs Eat Everything?

As a general rule, frogs will eat anything that is moving, is large enough to see, but small enough to fit into its mouth. So frogs may attempt to eat everything that moves and is smaller than them.

How do Frogs Hunt?

As a general rule, depending on the species, frogs hunt two different ways: passively or actively. Frogs can be ambush predators and employ a passive “sit-and-wait” technique where they wait for food to come to them. Other frogs actively hunt, chase, and eat their prey.