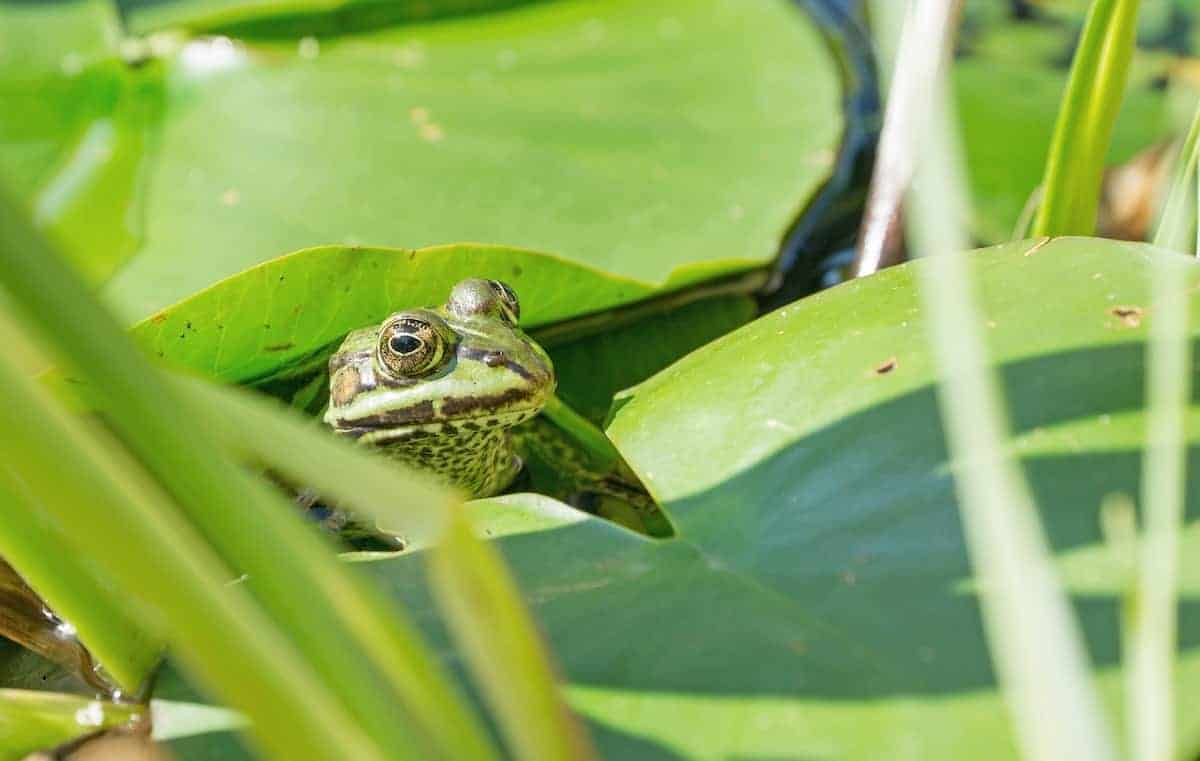 Frogs are one of the most diverse amphibian species in the world, with hundreds of varieties living in very different habitats. But the safest and best habitat for the majority of frog species includes three main things.

As a general rule, the best habitat for frogs has fresh water, access to plenty of food, and a safe place to reproduce. Each of these habitat essentials makes it easier for frogs to live in the wild and keep their population thriving.

The following article is a more in-depth explanation of what the best habitat for a frog includes. It also has a short description of other habitat needs for different frog species and a brief explanation of why frogs shouldn’t be kept as pets.

Most species of frogs can be found in ponds or streams, but they can also occasionally pop up in home gardens. Here is what is required for the best frog habitat:

The type of habitat that is best for the frog depends on the species, but these are the three most commonly needed characteristics for a frog habitat.

Frogs can only live in bodies of freshwater, not saltwater. Water helps frogs breathe through their skin as well as their lungs. Frogs may sit in water for hours at a time so they can breathe and freshwater is the ideal habitat to allow their skin and bodies to stay hydrated and oxygenated. If frogs lived in saltwater, they would risk becoming dehydrated and getting sick.

Frogs already have a certain amount of salinity in their blood cells, which is responsible for regulating their immune responses. The salinity in their blood cells isn’t as tightly packed as it is in saltwater. This means the water isn’t able to sink into their skin, and it just sweeps over them instead, dehydrating, and eventually killing the frogs. Living in a freshwater habitat is the only way frogs are able to avoid all these harmful things.

Frogs need clean water or water that is adapted to their habitat requirements. The water can contain phytoplankton, microscopic bugs, algae, and decaying organic matter, but it should not contain man-made chemicals or corrosive substances. To summarize, a frog’s habitat should not be polluted or the frogs could die.

Frogs are carnivores, and their diet includes anything from small river insects to mice and snakes. Some frog species will even eat other, smaller frogs if given the chance. Frogs also need to eat a variety of insects, so they get all of the necessary nutrients they need to survive. Frogs love to eat the following:

Frogs need to eat a diverse variety of insects because each of them carries different amounts of nutrients and proteins. For example, worms are high in starch and fat. Eating a small quantity of these is good for the frog, but they won’t be able to live off of them. Too much starch can result in damage to the frog’s liver, and too much fat can make the frog overweight.

As a result, they need to eat a variety of food to maintain a healthy and balanced diet (kind of like humans! :). A habitat that has a wide variety and amount of insects, small fish, small mammals, small amphibians, and small reptiles can help to make sure the frog is eating healthy.

The last necessity for a frog’s habitat is a safe place to have its tadpoles. Like all amphibians, frogs reproduce by laying eggs that absorb water around them, similar to the consistency of gelatin. This outer membrane keeps the developing tadpoles hydrated and moist, while also providing some protection from predators.

The eggs must be laid in a body of water in order to stay moist and hydrated. The exact location depends on the species of frog, but they’re usually laid near the pond or stream’s shore by a mass of plants and dirt. If the egg dries out, then the tadpole inside won’t be able to survive (CTNF).

Frogs also need a safe place to breed and live that does not have too many predators. Frogs truly have hundreds of predators that will gladly eat them. Frog predators include birds like herons, crows, and ducks; reptiles such as lizards, snakes, and alligators; big game fish including bass and muskellunge; small mammals from skunks and foxes, to raccoons, otters, and monkeys; as well as water bugs, other frogs, and humans. So the fewer predators the better.

The necessities mentioned above are the most commonly required for a frog’s habitat, but not all frogs need these to survive. Some frog species can survive and thrive in very different environments. What a frog needs can depend on where they live, what they need to eat, their species, and their size.

Depending on the climate of where the frog lives, they might need to survive in weather conditions that are more humid than in other places on the planet. For example, many of the frogs that live in the tropical rainforest would not survive the harsh winters of Canada like other frogs can. Tropical frogs are active all year and thrive in hot, humid conditions. Most Canadian frogs hibernate in the winter and so they are only active a few months in the year.

Most frogs can live off insects, but some species need a more protein-heavy diet to survive. One such frog species is the bullfrog, a type of frog that’s on the larger side of the amphibian family. Due to their large size, they need larger amounts of food to receive all their nutrients. Bullfrogs most commonly eat mice and small fish, so they’d need a habitat that has a good amount of these animals to survive.

When Are Frogs Most Active in Their Habitat?

Generally, frogs are most active in their habitat during mating season, after it rains, in the late evening, and at night.

Frogs Are Active During Mating Season

In the Northern United States and in Canada, frogs are generally most active in the Spring and they start calling mates to reproduce between March and May. In the Southern United States, frogs actively mate as early as November to February since the weather is still warm.

In other parts of the world, like Australia and in the Tropical Rainforest, frogs are active all year long because the climate allows them to thrive at all times. In the desert, frogs burrow underground during the dry months, in order to escape the hot sun and are active the rest of the year.

Frogs Are Active After it Rains

Frogs are generally very active during the Monsoon season, throughout the year in the Rainforest, and on days where it rains.

Ever noticed how loud frogs can be after it rains? That is because frogs thrive in rainy, humid environments partially because they breathe through their skin and oxygenate their bodies via water.

Many Frogs Are Active In The Evening And At Night

You may also have noticed that frogs can be very active at night when they start to croak and call. Some of the frog’s main predators like birds are less active at night, and so frogs come out to eat and reproduce while they have fewer chances of being eaten.

Should You Keep Frogs as Pets?

Frogs can be kept as pets, but they should not be. No matter how well they are cared for or how nice their enclosure is, their natural environment can not be fully replicated in an enclosed space.

When it comes to food, you have to feed the frogs live food every day, multiple times a day. Frogs won’t eat anything that doesn’t move, because they think it’s already dead and doesn’t have any more nutrients to offer. This task can rack up in price and time pretty fast, and the frogs still might not get all of the nutrients they need.

Clean water is essential for a frog’s survival since they need it to help them breathe. Because of this, you’ll have to change the water daily so that no bacteria grows that can harm the frogs. Lastly, frogs can’t breed in an enclosure since there isn’t enough room. To thrive as living animals, frogs should be kept in their natural habitats in the wild.

The best habitat for a frog to live in is somewhere that naturally has all its necessities including clean, fresh water, an abundance of bugs, and a safe place to reproduce. Frogs are an essential element to the environment, they truly help keep the bug population controlled and prevent algae from contaminating bodies of water. Natural habitats are the best place for frogs and for the environment.