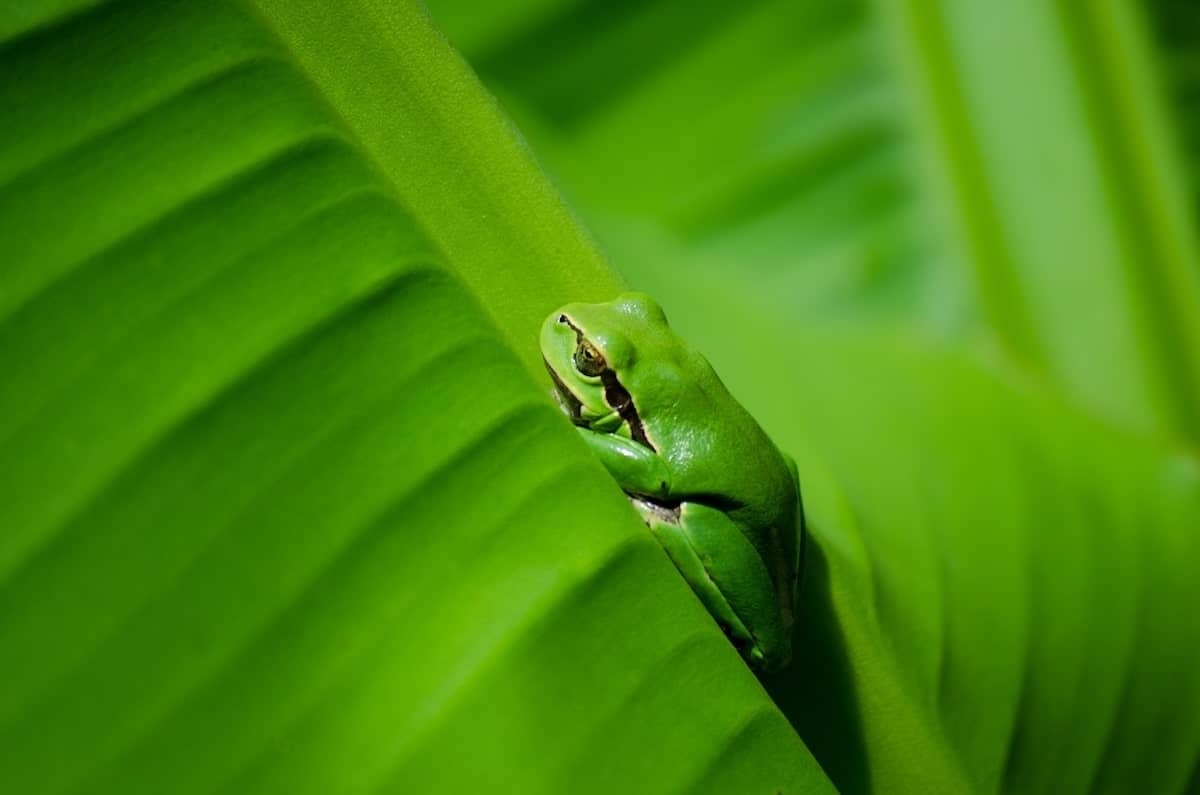 Amphibians are incredibly diverse in behavior, characteristics, and physical appearance. While frogs do boast a wide range of color shadings and patterns, green is undoubtedly the most common color variant, leaving some frog enthusiasts and animal lovers to wonder why this color is so prominent compared to others.

Frogs are generally shades of green to blend in with their environment. Frogs generally live among vegetation and being green allows them to camouflage and hide from predators within their habitat. However, not all frogs are green, as some are blue, red, yellow, brown, or grey.

Although most frog species are green, many others flaunt neutral colors, natural tones, or even bright and vibrant hues. Join me as I discuss why the color of frogs’ skin matters concerning their chances of survival and why different frog species may be different colors.

With so many hazards and dangers lurking around every corner, frogs have to be creative with their survival tactics while living in the wild. Their colors play a major role in their chances of evading some of the most threatening predators, in addition to the use of various other defense mechanisms.

Frogs are Green For Camouflage

Most natural frog habitats have green as a predominant color and are generally enriched with green landscapes, trees, plant life, and dense vegetation. Frogs are typically green or olive for this reason, as these colors allow them to blend in easily with the surrounding wildlife and overall environment.

The majority of arboreal frog species range in shades of green, as their natural environments are predominantly green. Some terrestrial frog species are also green since they may live in weeds, grass, or densely vegetated areas. Aquatic frogs may also be green, allowing them to blend in with surrounding wildlife such as lily pads and other aquatic vegetation (CTNF).

Frogs Can be Various Shades of Green

Frogs are naturally timid and peaceful creatures with very few tools to defend themselves against predators, so lowering the chances of being spotted acts as their primary form of defense. However, natural structures, plants, and trees typically have varying colors and markings, meaning frogs with a bold or solid green color may not blend very well.

As a result, most frogs that are predominantly green will still have additional colors on their bodies, which are included in the form of patterns, stripes, blotches, or other irregular markings. These inconsistencies in color also aid in blending in with the environment and deterring predators.

Not All Frogs Are Green

Frogs occur in a wide range of colors and shades. Since the purpose of camouflage primarily involves blending in with the environment itself, other colors can act as camouflage as well. As a result, frogs’ skin color will primarily depend on the specific frog species and the habitat.

Common frog colors include the following:

However, frogs can occur in some in-between colors, or they may have a mixture of additional hues on their bodies.

Some examples of mixed frog colors include:

Some frog species also have varying colors within the species, which is predominantly influenced by their overall environment.

The most common neutral color palettes for frogs include gray and brown. However, frogs may also range in shades of dark gray or black. These frogs usually have varying shades of similar colors on their bodies, but they may have alternating colors as well.

Some Frogs Are Brown

Brown frogs may be terrestrial, arboreal, or aquatic, as these habitats also have a wide range of brown hues. Typical shades include tan, russet, light brown, and dark brown, depending on the habitat. These frogs can easily blend in with countless natural areas, including:

Some Frogs Are Gray

Gray frogs often live in trees or in sandy regions, as these areas often have more muted tones. These frogs can easily blend in with their environment by burrowing into dry sand or climbing onto grey-brown trees. Some gray frogs can also live near water bodies, residing on rock faces for easy camouflage.

Many frogs that flaunt brown, gray, or other neutral tones often have specks or spots of green on their bodies as well. This is particularly common for species living in semi-aquatic environments. These species may have patches of green resembling moss, which further aids them in camouflaging.

Some Frogs Are Brightly Colored

Although most frogs have muted or neutral skin colors for the purpose of camouflage, some frog species prefer to stand out within their environments. This is especially true for Poison Dart Frogs that can be found in blue, yellow, or red.

However, such frogs may also flaunt secondary colors such as orange, bright green tones, or in-between red hues.

The most common reason for blue, red, and yellow frogs is the presence of toxicity levels. The use of these vibrant colors typically serves as a warning to predators, as the poison carried by these frogs is often potent enough to either harm, paralyze, or even kill large predators.

Such species typically have varying shades of the same color on their bodies, and they often flaunt a diverse range of dark or black patterns as well. These patterns can range from small spots to solid stripes, exhibited by the Green Poison Dart Frog (CTNF).

Although most cases of bright and vibrant frog species indicate toxicity, there are also cases where frogs attempt to mimic poisonous species. These frogs are either low on the toxicity scale or lack poison entirely, and they may display hints of bright colors to trick predators into thinking that they could be a risky meal.

Frogs are usually green, but they can range in various other colors as well. Species that use their color for camouflage typically have more neutral or muted tones, while toxic species generally flaunt bright colors for high visibility. Frogs can have green tones in either scenario, depending on the species and environment.

Learn more about frog colors on our blog