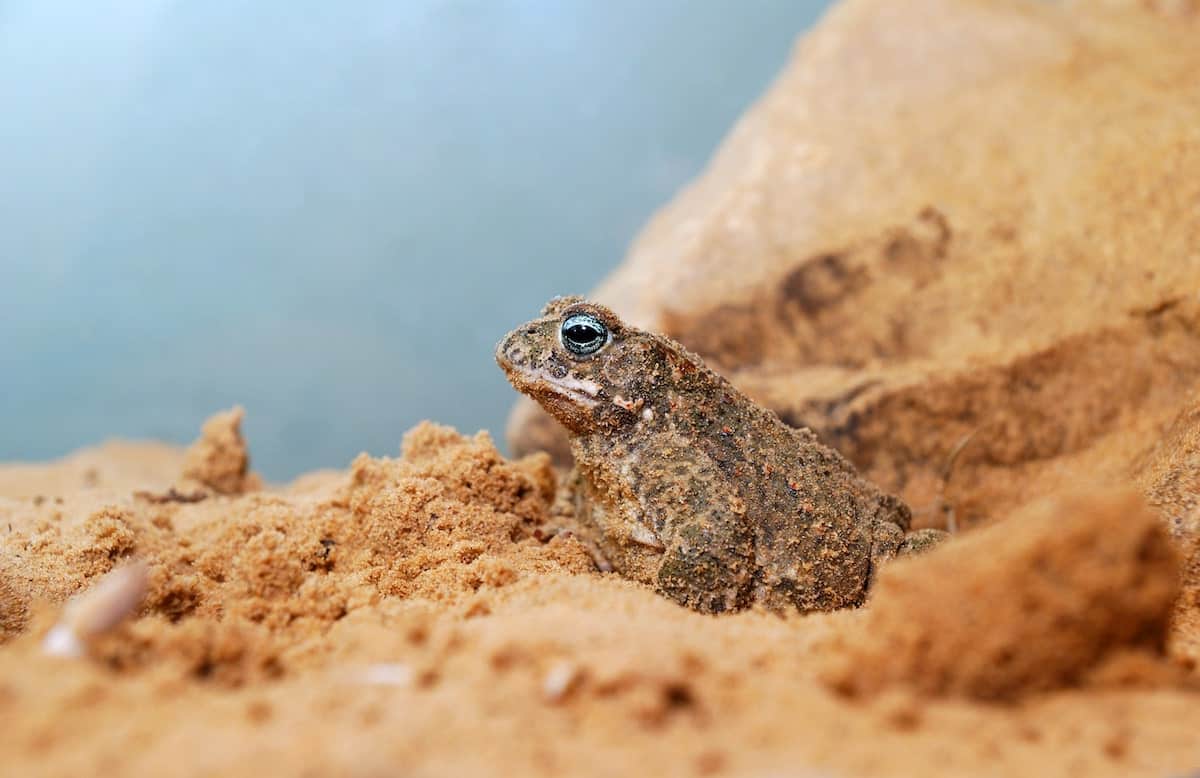 Toads are my favorite amphibian and there truly are some fascinating facts about them. I have been interested in toads ever since I found some in my backyard as a kid and I have learned so much about them since then.

Toads are amphibians that are part of the Anura order, more specifically members of the Bufonidae Family. Toads can be found almost everywhere on Earth, and the largest toad species is the Cane Toad.

Let’s drive into some awesome toad facts so you can differentiate toads from frogs, know more about how they interact with other species, or just impress your friends with your toad-based knowledge.

Facts About Toads vs Frogs

2. Toads are born in water and live on land as adults.

3. Toads only go back to the water to breed during mating season.

4. Many toads have glands that secrete poison behind their eyes.

7. Toads are generally shades of brown, whereas frogs are typically green tones and tropical frogs can be very colorful.

8. Some frogs have teeth but toads do not.

9. Toads do not have hair but the Wolverine Frog has a hair-like structure that are actually more like external gills.

11. Frogs generally have webbed feet to help them swim whereas toads do not.

12. Frogs and toads can breathe through their skin.

Learn more about the differences between frogs and toads in this article on our blog.

13. Toads do not like to be handled by humans.

14. You won’t get warts from touching a toad (but wash your hands).

15. You won’t get warts from a toad peeing on you (but wash your hands).

17. Some toads eat their own skin to cover their tracks from predators.

20. Toads are mostly ambush predators, meaning they sit and wait for food to come to them.

21. Toads hibernate underground during the Winter.

22. Female toads make a sound to warn male toads they have already laid their eggs and do not want to mate. Their sound is enough to make them go away.

25. Cane Toads (Bufo marinus) were introduced to Australia in 1935 to kill pests that eat sugarcane crops. But Cane Toads are poisonous and ferocious predators that prey on local species.

27. Cane Toads are poisonous and can be fatal to humans.

28. Even Cane Toad eggs are poisonous to predators.

32. Cane Toads are also called Marine Toads because their tadpoles can survive in certain degrees of salt water.

Learn more about Cane Toads in this article on our blog.

Facts About Toads Around The World

33. Toads are found on all continents except for Antarctica and some remote islands.

34. American Toads can often be found in people’s back yards and gardens.

35. Toads can carry Salmonella which they can transfer to humans and pets.

36. Toads like to live in damp, leafy, grassy, shady environments.

37. Oak Toads can be found in Florida and have a distinctive line on their backs.

38. Toad poison is used in shamanic practices in some parts of the world like Mexico.

40. In some cultures, toad poison was used to treat various sicknesses.

41. Toads may bite if they feel like they are in danger, but it does not hurt since they do not have teeth.

42.  The Common Surinam Toad which can be found in parts of South America carries its eggs on its back.

How Long Can Toads Live For? Toads can live up to 40 years, however, their life expectancy tends to be longer in captivity than in wild due to there being more predators and sicknesses in the wild.

Do Toads Eat Their Own Skin? Toads naturally shed their skin and may eat it to cover their tracks from predators. Eating their own skin allows toads to avoid being found.

Do Toads Have Hair? Toads do not have hair, however, they do have warts which can help differentiate them from frogs. There is a frog that has a hair-like structure on it’s body that helps it breathe, and it is known as the Wolverine Frog.

Why do Toads Scream When Touched? Toads may scream when touched because they feel like they are in danger. They may also puff up and scream to scare predators or look too big for them to eat.

Where do Toads Like to Live? Toad eggs and tadpoles live in water, but once thy are toadlets and adults, toads like to live on land in damp, leafy, grassy, shady environments. American Toads can often be found in people’s back yards and gardens.

Are Toads Dangerous to Humans? Toads can be dangerous to humans if their poison gets into the bloodstream. Cane Toad poison can be fatal to humans. Avoid skin to skin contact when handling a toad, wash your hands throughly or wear gloves.