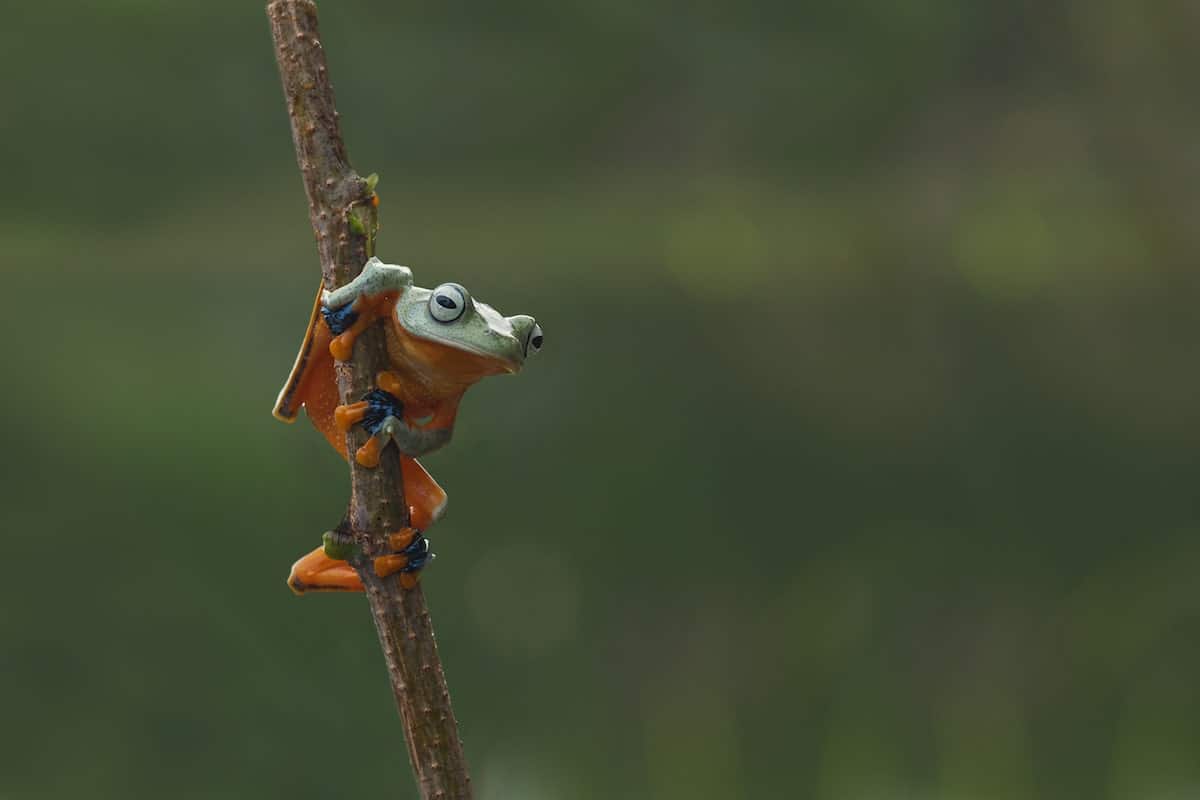 Understanding how frogs move is an area of curiosity for all ages. Whether it be a small child catching frogs with a friend, or a biology student dissecting one to learn about its anatomy, many are driven by the need to understand frogs.

Frogs generally move by jumping, leaping, hopping, swimming, climbing, crawling, or digging. Frogs are saltatory animals that have longer hind legs than can be twice as long as their forelegs.

We are all used to the idea that frogs hop, but they can actually do much more than just that. In this article, we’ll discuss how frogs move. This will cover everything from the specific name of its movement to how its bone structure is built to allow them to be so versatile.

Read this if you are looking to move a frog out of your yard.

Frogs generally move on land by jumping, leaping, or hopping. Frogs have elongated bones in their back legs that enable them to exert the necessary force required to jump.

The bone structure of the frog is essential in creating enough force and power to jump as well as they can. To jump, the frog applies pressure to its lower legs. Due to the elongation of the tarsal bones, the force built up is like a spring.

The pressure allows the energy to build and the force, when released, is distributed by the urostyle. The frog’s hips act as a movable joint which allows the frog to control the direction and force applied in the jump.

Some frogs are terrible jumpers. This is especially true for toads that have short hind legs that are made for digging. Other frogs are excellent jumpers. Bullfrogs can generally jump from about 1 m (3 ft) to 2 m (6 ft) with ease.

Swimming is a less complicated anatomical process than jumping. The frog has rotation around the hip joint and knee which allows it to use its legs as powerful oars. Because the hip structure of the frog is fairly open, frogs tend to have a greater range of motion providing them a strong kick. By drawing their legs directly to the body and thrusting the legs directly back, the frog is able to generate far more force to propel itself through the water.

The webbing between its toes is also very important to this process, allowing the frog to create more velocity by pushing a higher volume of water. Without this, the frog would not be able to effectively travel in the water. The frog’s skin is hydrophobic meaning that it repels water from its outer layer. Its aerodynamic build also enables less water resistance as it swims.

Jumping and swimming are primary modes of travel for many frog species. But some frogs are not adapted to swimming or jumping at all. This is the case for Tree Frogs which, instead, are excellent climbers.

Tree frogs have sticky pads on their toes. These pads act as a mild adhesive or suction cup to whatever surface the frog is attempting to climb like bark or leaves.

If a surface is too wet to properly adhere, Tree Frogs can rely on their long limbs by wrapping them around the tree or leaf. Tree Frogs are among the only species that have these pads on their feet. Examples of Tree Frogs with padded toes include Spring Peeper, Australian Tree Frogs, Gray Treefrogs, Red-Eyed Tree Frogs, Holarctic Tree Frogs, and White-Lipped Tree Frogs.

Learn more about Tree Frog Toes in our article about Frog Feet!

Toads are terrible swimmers, jumpers, and climbers. However, they are excellent at crawling and digging. Toad’s toes are like fingers and can be spaded and somewhat webbed. Their legs are short and stubby but powerful and strong, made for pushing dirt behind them to dig holes in the ground.

Toads like to dig holes to burrow in them during the day. Mud holes are humid and allow toads to remain hydrated and protected from predators. Toads are especially active at night when their main predators are inactive, but their food is out and about.

Learn more about the differences between toads and frogs in this article on our blog.

Some Frogs Move by Flying

Some frogs move by “flying” and are known as Flying Frogs. They generally jump from trees and float in the air until they reach their destination thanks to the webbing between their toes.

Flying Frogs do not actually fly like birds but can glide after a powerful jump thanks to their webbed feet. They jump from tree to tree to avoid predators and sometimes have to glide through the air to get there. Flying Frogs may jump from one tree, spread open their webbed feet, and then glide and direct their movement with their feet, and then use them as a parachute to land safely.

Frog movement is called “saltation” which means to dance or to hop in Latin. Saltation is a movement that is a definition reserved for animals with hind legs that are approximately x2 as long as their forelegs.

The word also refers to the frog’s bone structure. As defined by Britannica, “All saltatory animals have hind legs that are approximately twice as long as the anterior-most legs.” Therefore, the skeletal construction of the animal is key to fitting the description of saltation (CTNF).

Frogs’ bone structure and skeletal system are designed for function and stability. For example, a frog’s head is very light and its hind legs are generally long. This allows for better projection in leaping.

Unlike the human skeleton, the frog has eight vertebrae (a relatively small number) that are fused together. If the spine were unfused, it would hinder a frog’s force and stability requiring them to exert far more energy to jump.

The frog’s skeleton is has a urostyle. This is a combination of lower bones that help keep the frog remain more balanced as it leaps from place to place. Frogs also have added rotation around the hip joint and knee, which creates additional areas of movement. Instead of having two bones in the calf, frogs have one which creates more mobility.

Learn more about how frogs use their feet to move depending on the species in this article on our blog.

Do Frogs Jump or Walk?

Generally, frogs jump to move around. Frogs cannot walk or stand on their hind legs like humans because their back is not structured to support walking on hind legs. Frogs may also climb or crawl to move depending on the species.