Herpetology is the study of reptiles and amphibians – but what does it really entail? I’ve worked in the field of herpetology for over a year now, and been fascinated by it for much longer.

I frequently get asked just what exactly herpetology is, and how it could be classified within the umbrella of science. It’s a great question.

It’s not easy to categorize any branch of science neatly. But herpetology’s wide, loosely connected range of topics make it even harder than most to categorize.

In fact, from a scientific perspective, it barely even makes sense to study reptiles and amphibians together at all! Let me explain.

Herpetology is the study of reptiles and amphibians.

But why would reptiles and amphibians be grouped together?

Ultimately, the answer dates back to the days of Carl Linnaeus, the 18th century scientist who developed the binomial (two name) scientific naming system we use today. It was Linnaeus who was the first to group the two types of animals together.

But reptiles and amphibians are studied together to this day under the umbrella of herpetology, which covers a huge range of focuses and careers.

Let me explain the ways in which herpetology qualifies as science, biology, and zoology.

Science is any form of study of our world, and anything within it. Science covers an extremely broad umbrella that encompasses everything from entomology, to volcanology, to meteorology, and everything in between and beyond.

Science is ultimately humans’ way of learning about and understanding the world around us. Everything from the first caveman to wonder why the sky was blue, all the way up to modern space travel can be considered science.

Because science as a whole is so incredibly broad, we break it down in many smaller categories to help ourselves understand what we mean.

If someone just tells you they’re a scientist, that really doesn’t tell you anything at all about what they do.

Even those categories into which science is broken are often still very broad, and require further categorizing into smaller and smaller disciplines.

Since herpetology is the study of an aspect of our natural world, it is a science.

Biology is the study of living organisms. As such, biology encompasses everything from the smallest bacteria to the largest whale.

All plants, animals, and fungi also fall under the umbrella of biology. While many people study biology and work as biologists, they will almost always specialize in a much smaller category within biology as a whole.

Since any study involving living organisms is a type of biology, many scientists are also biologists, even if they don’t typically describe themselves as such.

Herpetology is considered biology since it entails the study of living organisms.

Zoology is the study of animals. This could be anything from butterflies, to snakes, to giant squid.

Just like we have seen for all of our prior categories, there is still a lot of room to break zoology down into smaller pieces. For example, ichthyologists study fish, and ornithologists study birds.

While the “zoo” part of zoology may lead to believe all zoologists are zookeepers, this isn’t necessarily the case. While some zoologists are also zookeepers, many also work in other concentrations such as research of conservation.

Herpetology is also a form of zoology, as it also entails the study of animals.

Why is Herpetology Science, Biology, and Zoology?

Ultimately, each of these categories – science, biology, and zoology – are very broad categories, with many, many fields falling into one, two, or all three of them.

In fact, it probably makes the most sense to think of these categories like a nesting doll.

Did you ever have a toy nesting doll as a child? When you open the outer doll, inside is a smaller doll. And that doll contains another smaller doll, and so on. 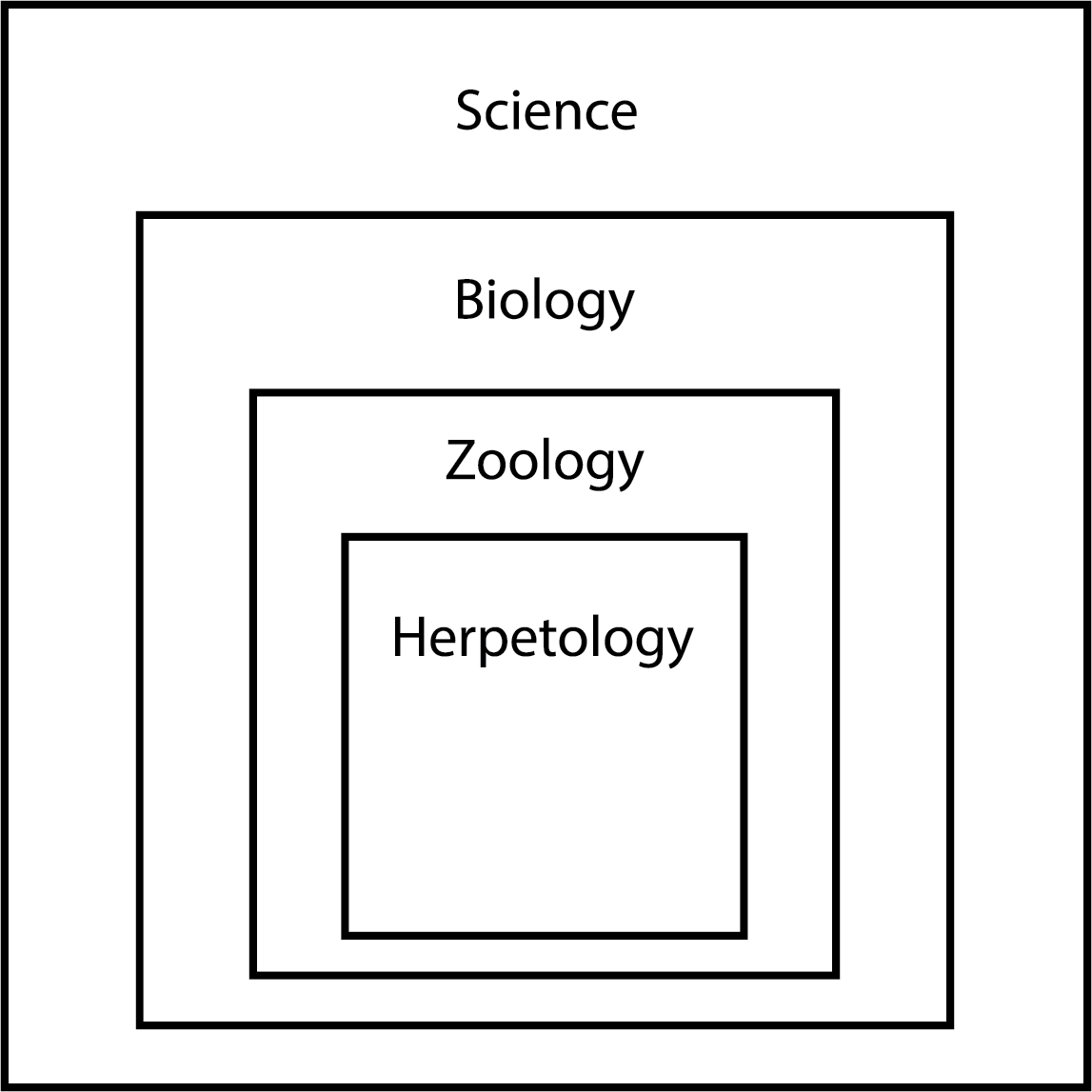 Think of science as the largest, outermost doll that contains all the others. In this case, our second doll would be biology. While biology is still a massive, broad field, it is smaller than science as a whole, and fits fully within it.

Here we have gone from a huge overview of everything in our world (science), through a study of all living organisms (biology), through the study of animals (zoology), and arrived at the study of reptiles and amphibians (herpetology).

Let’s imagine, for example, a person whose job is researching a specific family of frogs. This person, since they study a type of amphibian, is a herpetologist.

It was an exciting moment when I first realized that, as someone working in the field of herpetology, I could apply these terms to myself now too!

While these umbrella terms may seem overly broad and daunting, I find it incredibly exciting to realize that I can call myself a member of the same group as such a massive number of incredible people making incredible progress in so many fields, and people I look up to.

This article was written in collaboration with another Master Herpetologist certified by the Amphibian Foundation.

Daniella is a Master Herpetologist and the founder of toadsnfrogs.com, a website dedicated to educating the general population on frogs by meeting them where they are in their online Google Search. Daniella is passionate about frogs and put her digital marketing skills and teaching experience to good use by creating these helpful resources to encourage better education, understanding, and care for frogs.

Disclaimer: Toadsnfrogs.com is a participant in the Amazon Services LLC Associates Program, an affiliate advertising program designed to provide a means for sites to earn advertising fees by advertising and linking to Amazon.com. Toadsnfrogs.com is compensated for referring traffic and business to these companies. This site does not constitute legal, medical, or veterinary advice. Learn more in our Terms.

Daniella is a Master Herpetologist and the founder of toadsnfrogs.com, a website dedicated to educating the general population on frogs by meeting them where they are in their Google Search. Learn More.