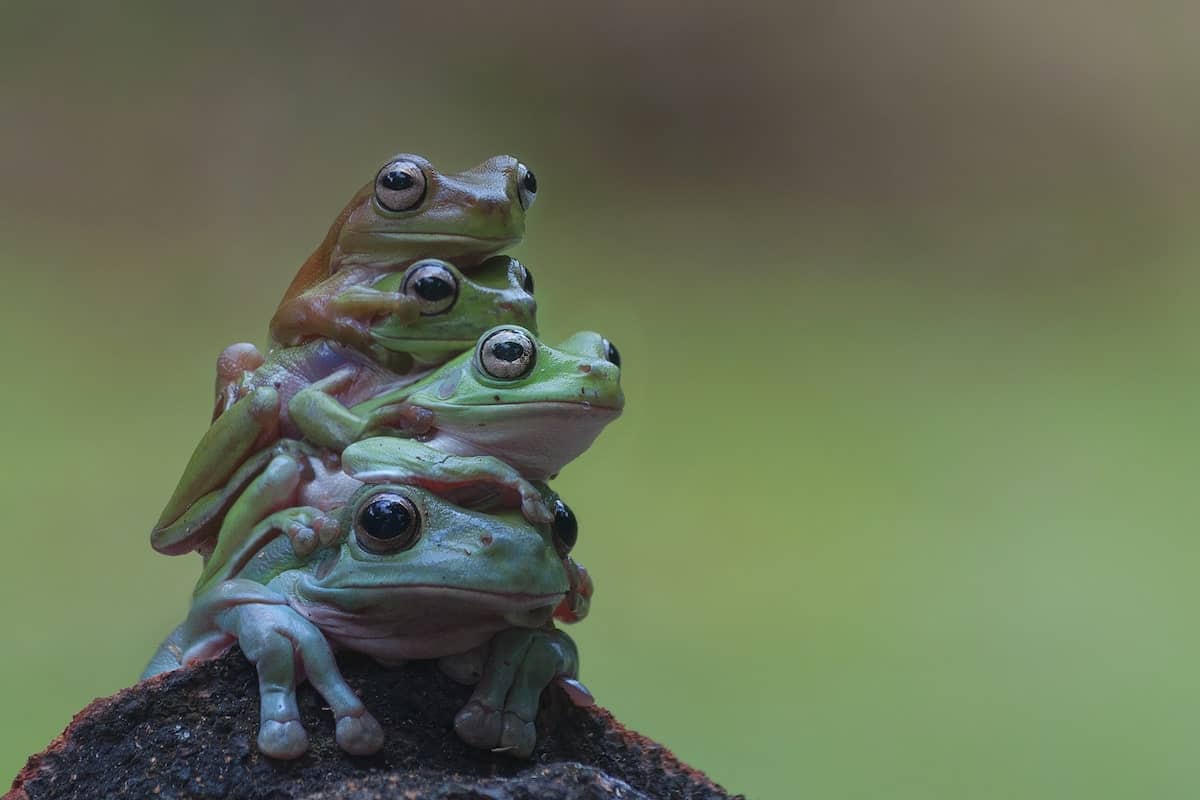 It’s well known that frogs typically congregate together during mating season to lay hundreds or even thousands of eggs at a time. Many different animals have been allocated with specific terms for collective groups. But, such lists typically focus on mammals and popular animals, often excluding frogs and other amphibians.

A group of frogs is generally referred to as an army or colony, as these terms are the most universal across various cultures and geographical locations. However, there are various additional terms for a group of frogs as well, including a band, chorus, cohort, bundle, troop, bevy, among others.

While there are numerous collective terms for groups of frogs, the context and specific nature of the frog group predominantly determines which term is most appropriate. Join me as I discuss the various collective terms used to describe a group of frogs and when each term is applicable depending on context.

Common Names For A Group of Frogs

Here is a list of common names for a group of frogs:

Frogs are typically solitary creatures but congregate in groups at various stages of the metamorphic development process. What a group of frogs is called may vary depending on their age, the approximate group’s size or total number, the group’s communal intent, and other characteristics.

That being said, the collective names used to describe groups of frogs do not concern the specific features of the frogs themselves. As a result, the above terms would be applicable irrespective of whether the species is terrestrial, arboreal, or aquatic.

An Army or Colony of Frogs

The term ‘army’ is by far the most classic and common term for a group of frogs. But, a large group of frogs can also be referred to as a colony. These terms are most appropriate when the group is large in number, predominantly comprising adult frogs.

Using the terms ‘army’ and ‘colony’ to describe a group of frogs has led to many questions and confusion, as frogs are incredibly peaceful creatures. However, these terms technically define huge collections, and further associations are predominantly based on human activity.

However, frogs do hold a wide range of natural defense mechanisms, which they use to survive in a tough and dangerous world. From flashing their colors and patterns that confuse predators to camouflage and toxic skin or gland secretions, frogs are well-equipped to tackle even the most complex threats in the wild.

A Band of Frogs

A group of frogs can also be referred to as a ‘band’, but this term is generally applicable when the group is medium in size. Unlike an ‘army’ or ‘colony’ of frogs, a ‘band’ of frogs describes a group of frogs comprising frogs at various developmental phases, including froglets, adolescent frogs, and mature frogs.

A Chorus of Frogs

A group of frogs may be referred to as a ‘chorus’ in some instances, depending on the specifics within the group. The term ‘chorus’ is generally applicable only when the group comprises males, typically seen during breeding seasons when males gather to attract females with their unique and melodic mating calls.

A Cohort of Frogs

Uncommon Names For a Group of Frogs

While the terms ‘army’, ‘colony’, ‘band, ‘chorus’, and ‘cohort’ are the most commonly used to describe a group of frogs across most instances, there is still a wide range of additional collective names for groups of frogs as well. Depending on numerous cultural variations and the instance’s context, the following frog group names can still be deemed applicable and accurate (CTNF).

Negative Names for A Group of Frogs

Although uncommon, some may refer to a large group of frogs as a ‘plague of frogs’. This term has little to no universal use, and it is predominantly influenced by cultural or religious references or associations with extremely invasive frog species.

More About Groups of Frogs

There is a wide range of collective names for a group of frogs, with an army or colony being the most common. All frog group names may be applicable in various contexts, depending on the frog group’s ages and overall purpose.

Learn more about groups of frogs on our blog:

What Is A Group of Baby Frogs Called?

What Is A Group of Baby Frogs Called? Baby frogs can be described as tadpoles, froglets, or polliwogs, depending on the metamorphic developmental phase. A ‘nest’ of baby frogs or froglets is the most common and universal collective name in these instances.

What Is A Group of Frog Eggs Called? Professionals have designated collective names for ease and convenience since most frog species lay eggs in hundreds of thousands. Frog eggs can typically be found in clumps or clusters and are generally referred to as ‘frogspawn’ or ‘egg masses’.