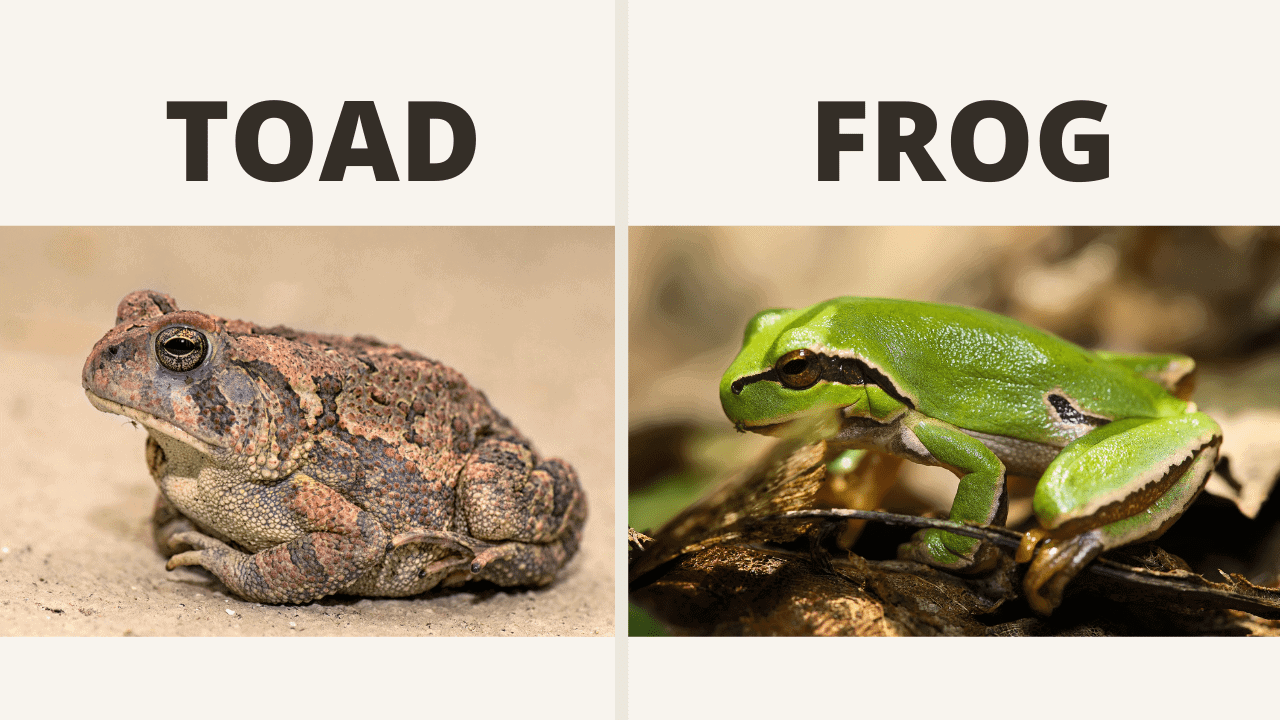 If you’re interested in amphibians, you might be wondering what the differences are between toads and frogs and if they can peacefully coexist in a shared space. Although frogs and toads might look similar to the observer, they are different species with different needs, which can impact the frequency with which they interact and also their behaviors toward each other.

Generally, toads have dry warty skin, have parotoid glands behind their eyes that secrete poison, stubby bodies with short legs for digging, a broad nose, are a dull color, and live on land. Whereas frogs live near a source of water, are smooth, bright, lean, and have long legs to jump and swim.

Let’s dive into the differences between toads and frogs as well as similarities and discuss what happens if they cross each other’s paths.

As for similarities, toads and frogs are both amphibians from the order of Anura. They both eat similar things like bugs and small rodents, reproduce by amplexus, and spawn in water during mating season.

Toads and frogs also have similar personalities to frogs.

All Toads are Frogs, but Not All Frogs are Toads

Let’s dive further into the differences between toads and frogs so you can spot them in the wild and in your backyard (CTNF). Check out our identification charts for more. Learn more about the different types of frogs including aquatic, arboreal and terrestrial frogs in this article on our blog.

Einstein once said, “Everybody is a genius. But if you judge a fish by its ability to climb a tree, it will live its whole life believing that it is stupid.” The same goes for a toad; they are terrible swimmers, they are not good at climbing, but judge them on their digging skills and you will be surprised at how good they are (CTNF).

Toads have short bodies and powerful legs that help them dig the soil behind them to make moist holes for them to burrow in during the day. Even though their skin is rough and dry, they breathe and drink through their skin like frogs and need access to moisture to survive. Frogs also have teeth, whereas toads do not.

Learn more about frog teeth in this article on our blog.

“Clawed fingers” may be a bit of a metaphorical exaggeration but have a close look at the image below to understand what toad fingers look like. They are fairly long and have a bit of what looks like a fingernail, hardened skin, or “claws” that help them dig.

Frogs, however, are equipped to climb or swim depending on the species. And so aquatic frogs have webbed toes to help propel them in water, and arboreal frogs have padded toes to help them climb trees and stick to leaves.

Learn more about frog feet in this article on our blog.

Another difference between frogs and toads is how they move and get around.

This is one of the reasons why it is important to put a cover over your window well if you happen to have basement windows in your home. Toads often fall into window wells and get stuck since they cannot jump high or climb out. If you have toads in your window well and would like to know what to do to help them, check out the dedicated guide on our site.

4. Toads Burrow During The Day

Generally, toads spend most of the day on land in holes that they burrow in to breathe, drink, stay hydrated, and hide from predators. Toads are active at night when they come out to hunt. Whereas aquatic frogs spend most of their time sitting and breathing in water during the day.

Toads live on land and frogs are generally close to a water source. Like frogs, toads are born in water, but a key difference between the two species is that toads leave their place of birth to live on land once they are out of the tadpole stage and become toadlets (or baby toads). They only return to the water where they were born to reproduce once they are mature enough (CTNF).

On the other hand, frogs need to be close to a water source. Although they live in trees, most arboreal frogs need stable access to water. For example, Spring Peeper are small tree frogs that live next to ponds that generally do not have any fish. Even though they live in trees, they still need direct access to water to survive. This has a lot to do with how frogs breathe and drink.

5. Toads Live on Land, Frogs Live in Water (Or in Trees)

Although both frogs and toads lay their eggs in water, frogs typically stay closer to bodies of water throughout their whole life and require water for their habitat. Whether they live in the mountains or a tropical forest, frogs generally live near lakes, ponds, creeks, streams, marshes, swamps, or bogs.

By comparison, toads do not need as much access to water. Toads are most often found in dry areas such as grasslands or fields and can even show up in people’s yards.  Additionally, toads need access to soil, mud, or dark, hidden, humid spaces to burrow within their habitat.

Toads only return to the body of water where they were born to reproduce. Although both toads and frogs reproduce by amplexus, toads lay eggs in strings, whereas frogs lay eggs in clusters.

If you find Anura spawn in the wild and are wondering if they blog to toads or frogs, look at the shape of the spawn. Toad eggs stick together in lines forming strings, and frogspawn sticks together in large clusters to anchor to vegetation. Check out the video below from our YouTube channel for more information on how frogs reproduce.

All toads are poisonous since they have parotoid glands behind their eyes and on their backs that secrete a toxic poison when they feel stressed or in danger. Toads use their poison as a defense mechanism. Some toads can be lethal to humans. Others are not very dangerous but can be lethal to pets if they lick or ingest them. Be sure to consult a vet quickly if your cat or dog licks or ingests a toad.

However, most frogs are not poisonous. Many of the well-known poisonous frogs live in the Rainforest. Poison Dart Frogs are small, primary-colored frogs that use their color to warn predators not to eat them. They can secrete enough poison to kill 10 people.

The biggest issue you should be aware of is that both toads and frogs can carry salmonella. So it is important to wash your hands before and after handling frogs or toads, wear gloves, or avoid handling them at all if possible. Learn more about the different colors of frogs in this article on our blog and how to handle frogs and toads with care in this article.

8. Toads Can Live Longer Than Frogs

The species of frog, the presence of predators, and their environment and dietary needs make their expected lifespan vary. Toads live long in captivity when all of their needs are met. When toads are kept in captivity they generally do not encounter predators (unless the owner’s other pets try to intervene – keep your dog away) and have higher chances of survival.

Learn more about frog longevity in this article on our blog.

More About Differences Between Toads And Frogs

Learn more about the differences between toads and frogs in the dedicated guides on our blog:

Common Questions About Toads And Frogs

Can Toads Swim? Generally toads cannot swim very well and tend to only be in water to reproduce by amplexus with a partner of the same species of the opposite gender. Contrary to frogs, toads leave water to live on land once they are no longer tadpoles and only return during mating season.

Is a toad bigger than a frog? Toads may be bigger than frogs depending on the species. Generally, adult Cane Toads are much larger than Spring Peeper, Wood Frogs or Green Frogs. However, American Bullfrogs, African Bullfrogs and Goliath Frogs can grow to the size of a small cat.

National Geographic, Drought drives toads to mate with other species, 2009