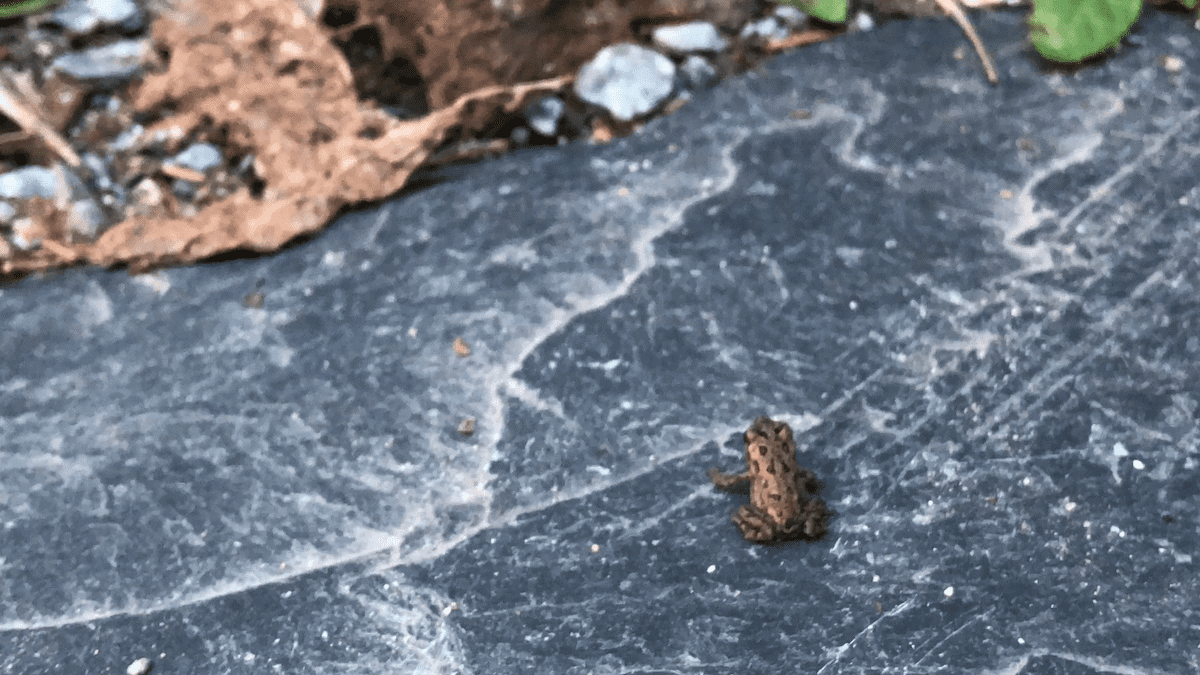 What is cuter than a frog? A baby frog! Here are some super cute baby frog pictures with more information on each of them.

Although this frog is called “Golden Mantella,” do not let the name fool you. These frogs can be found in Madagascar and are generally shades of gold to deep red like the one in the photo above. According to the IUCN Red List, these tiny frogs are critically endangered, notably due to the pet trade.

This tiny American Green Tree Frog flaunts classic arboreal traits, including prominent padded toes and a rich green skin tone. These traits are incredibly useful, as it helps them blend in with the environment and cling to vegetation, as seen in the picture above (CTNF).

The above picture displays a baby Olive-Snouted Tree Frog (Scinax elaeochrous) perched upon a leaf in Costa Rica. A single ray of sunshine perfectly frames this adorable frog, and it seems to be enjoying its sunny spot within an otherwise dark jungle.

What could be cuter than a baby frog? A sleeping baby frog! This stunning “Scarlet-Webbed Treefrog” (Hypsiboas rufitela) has been found fast asleep on a large leaf in Costa Rica. Its translucent color helps it blend in with its natural environment.

This baby Red-Eyed Tree Frog was discovered half asleep in Costa Rica. This tiny frog may seem to be winking at the camera crew, but it is more likely to be resting with one eye open. Frogs often use such tactics while they rest to ensure their safety.

The above image displays a baby “Stauffer’s Treefrog” (Scinax staufferi), perfectly content on a banana leaf in Belize. Its pale and neutral color creates a lovely contrast within its environment, and it appears to be smiling at the camera.

A baby “Olive-Snouted Treefrog” (Scinax elaeochrous) was found perched on a banana leaf in Costa Rica. It seems content within its home, seemingly peering up at the camera with a tilted head.

This miniature froglet flaunts some prominent dorsal ridges, amber eyes, and a range of interesting brown patterns. Although it may seem reasonably small compared to the leaf, the water droplets are extremely telling of its true size.

This tiny and brown froglet appears to be the same or a similar species to the previous miniature frog. This baby frog is so tiny that it seems to be quite comfortable on the very tip of a human’s finger. Always remember to wear gloves if you are going to pickup frogs. The frog could get hurt if it jumped off this person’s hand at this height.

The above photo displays a baby Cane Toad resting on a gentle human hand. It has various dark brown color shadings and patterns, a rigid body shape, and tiny eyes, and it lacks webbing between its toes. The person holding it should be wearing gloves especially since, even at this size, Cane Toads are poisonous.

This photo displays a young baby toadlet keeping cool in a shallow water pond. Its dark colors and bulbous black eyes contrast with the pond’s surface, allowing onlookers to get a fairly good glimpse of its physical features.

The baby American Green Tree Frog displayed in the above picture boasts deep green and textured skin, which blends well with its habitat. This tiny frog is clinging onto a leaf, perhaps to better observe its surrounding environment.

This image displays a selection of interesting natural events, including an adorable tiny frog, fascinating leaf formations, and the hunting process. This miniature frog is cradled by a curled leaf, which also houses a soft spider’s nest. Based on the image’s context, the frog may be patiently awaiting its next meal (CTNF).

Red-Eyed Tree Frogs are iconic around the world, but they also are considered Costa Rican emblems. The above image displays a fairly small and incredibly photogenic Red-Eyed Tree Frog perched on a human’s hand, flaunting its bright and vibrant colors. You have to be very careful when handling any frogs like this however, since they may jump and hurt themselves if they are not ready to land on the ground.

I found this cute baby within its natural habitat. It flopped onto this leaf and pretended to play dead when we approached. I didn’t spend to much time to not frighten it, but I had just enough time to get a closeup of it’s tiny yellow hands. It is a very beautiful young American Toad.

The above photo displays a cute miniature “Tropical Frog” perched on a leaf in a Costa Rican tropical rainforest. It has interesting rust and brown patches across its body, contrasting well with its bright green environment.

I found this super cute baby American Toad sitting near a rock at the beginning of spring. This tiny toad boasts dark brown-greyish skin to blend in with its environment. It looks like a pro rock-climber about to reach the summit.

Glass Frogs have been a natural enigma for many years, and this image of a “Spotted Emerald Glass Frog” (Hyla punctata) is nothing short of spectacular. These frogs live throughout Central and South America, and their organs can be seen through their semi-translucent skin.

This image shows a pair of Golden Poison Dart Frogs perched on a branch, creating extreme visual contrast within their environment. As beautiful as these tiny frogs may be, such bright colors typically indicate high toxicity levels.

This frog is undeniably stunning, boasting vivid lime and black colors topped with striking patterns and orange-tipped toes. Keep in mind it is best to avoid touching or holding frogs, especially when they are bright coloured like this, which can indicate toxicity.

I saw so many baby toads hopping around this spring, even though they may be hard to spot at times (like in the image above, look on the leaf at the bottom center of the photo 😉 If you would like to find baby toads in the wild, the best places to look are near small freshwater ponds during early Summer or during the Wet Season.

This baby Wood Frog sits happily on a bright green Fir Tree branch in a lush forest. It boasts brown patches and patterns, including dark markings along the sides of its face that looks like a mask.

Poison Dart Frogs are some of the most toxic animals on the planet, but they are still incredibly peaceful creatures. The above image displays an Amazonian rainforest Dart Frog caring for its babies by carrying the tadpoles on its back. These are some of the rare frogs that care for their young.

The above image displays toad with varying patterns and bumpy skin. The toad looks a bit grumpy, but that’s also how some toads naturally look, especially when they are being bothered by humans 😉

Learn how to find frogs in your area in the articles below:

Note: Unless specified that they are our own in the image description, these photos were sourced under licence from Envato Elements.

Check out our other resources to learn more about frogs on our blog: